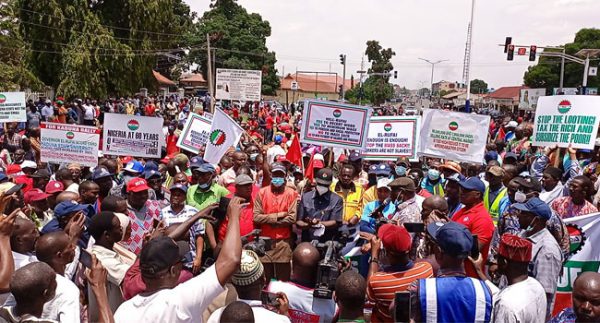 The protest started on Monday following the disengagement of over seven thousand civil servants at the state and local governments by the Kaduna State government.

The strike has paralysed critical sectors of the economy in the state and the state governor Nasir El-Rufai in reaction declared the NLC Chairman and other leaders wanted for economic sabotage and attacks on public infrastructure in Kaduna State under the Miscellaneous Offences Act.

Despite this, the workers again gathered on Wednesday morning at the state NLC secretariat amidst heavy security chanting songs of solidarity.

The protest was done amid heavy security due to an earlier attack on the workers by armed thugs who hurled stones at them and injured many.

The NLC President insists that the protest must go on despite the attack on the workers the thugs.

According to him, the protest is backed by the constitution which guarantees the workers the right to freedom of expression and movement.