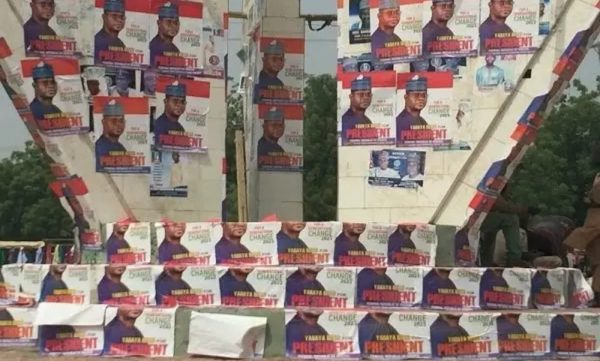 Presidential campaign posters of Kogi State Governor, Yahaya Bello, have flooded major streets in the Federal Capital Territory (FCT), Abuja.
This is the latest in a series of presidential campaign posters on the streets of Abuja in recent weeks.
Other 2023 presidential hopefuls whose campaign posters have adorned the streets of Abuja are the APC National Leader, Bola Tinubu; former Vice President Atiku Abubakar and former Senate President Bukola Saraki.
Bello’s posters had various inscriptions such as, “2023 Presidency: Yahaya Bello for a generational change,” Yahaya Bello for President 2023″.
Some were pasted on electric poles, roundabouts, overhead bridges, among others.
READ ALSO: APC Will Win Presidency In 2023- Chieftain
They were sighted around the Ministry of Justice; the Federal Secretariat; NICON Luxury; Sheraton Hotel, street leading to the All Progressives Congress (APC) national secretariat; National Universities Commission (NUC), the Maitama round about as well as Garki 2.
The Nigerian Youth Awareness Group (NYAG) 2023 has been campaigning for Bello who is yet to formally declare his intention to run for the highest office in the land.