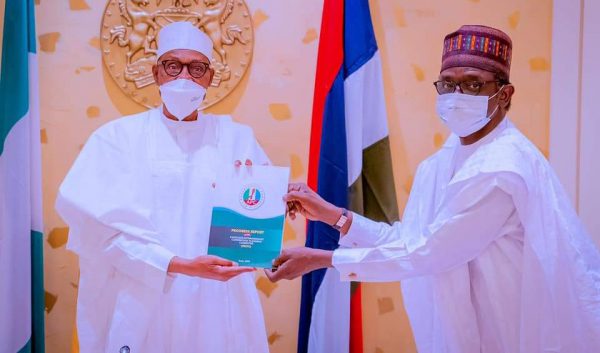 Yobe State governor Mai Mala Buni on Friday said the All Progressives Congress (APC) is now “peaceful, orderly and more accommodating” than when the former party chairman, Adams Oshiomhole was at the helms of affairs.

Mr Buni came on board as the party’s caretaker chairman shortly after Mr Oshiomhole was ousted out of office, leading to various candidates declaring themselves leaders of the party.

At a meeting between President Muhammadu Buhari and National Caretaker/Extraordinary Convention Planning Committee (CECPC) on Friday, Mr Buni said the party is doing better than it was under the watch of Mr Oshiomhole.

READ ALSO: ‘APC Is Back To Life’ — Buhari Says Party Crisis Over

“The party is now more peaceful, orderly and accommodating than what we met on the ground,” Mr Buni was quoted to have said in a statement by Garba Shehu on Friday. “Although there was initial fear, the mobilisation and sensitisation was able to allay the fears of members.”

Mr Buni also said his leadership gave all aggrieved members of the APC fair hearing and was able to resolve issues with many withdrawing cases from court, adding that accumulated legal fees left behind by Oshiomhole has been cleared.