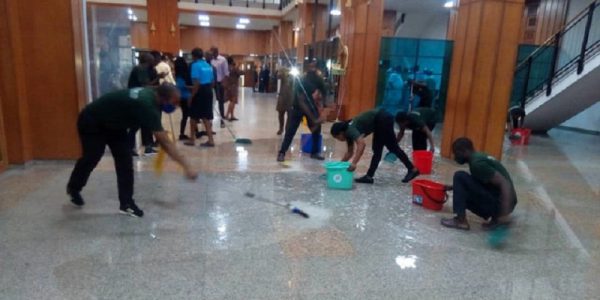 The Tuesday morning rain in the nation’s capital, Abuja, has disrupted activities at the Senate hallowed Chamber following the heavy leaking of the roof.

With the development, Senators who were already at the chamber were forced to come outside, discussing in groups.

National Assembly staff have in the last couple of minutes started packing the water with buckets and packers, just as the entire environment, fora is covered with water.

Some Senators who came later while the place was filled with water, had to go through the House of Representatives.

Recall that the sum of N37 billion was budgeted for the maintenance of the complex in the 2020 budget which elicited wild reactions from the public including the Civil Society Organisations (CSOs).

The controversy that trailed the budget which was considered too humongous led to its reduction but it wasn’t approved by the Federal Executive Council.

Amid the leaking roof of the lobby, Senate President, Dr. Ibrahim Ahmad Lawan entered the chambers at exactly 11.00am to preside over the plenary.