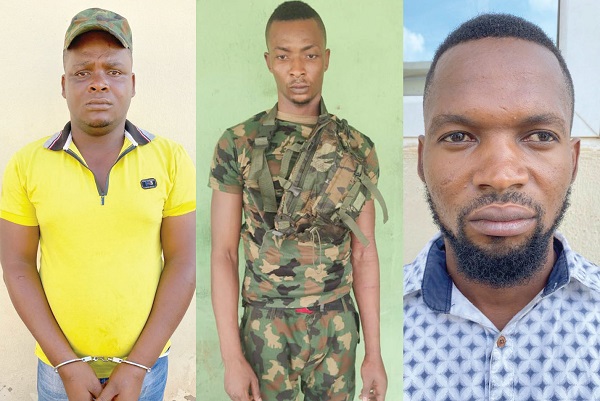 Three dismissed soldiers who aided the training of over 4000 members of the Eastern Security Network (ESN) have narrated how the leader of the Indigenous People of Biafra (IPOB), Nnamdi Kanu, lured them to join the group, but failed to fulfill his promises.

According to the trio who were recently arrested by operatives of the Force Intelligence Response Team (IRT), they were promised heavy monthly pay, an all-expense paid trip abroad for further military training, and the post of generals when the Biafra state is actualised.

The suspects, Linus Owalo, Godswill Steven and Chinasa Orji, were arrested after operatives acted on intelligence from some members of the ESN, who were arrested during a raid of the group’s hideouts in Imo, Anambra, Delta and the Federal Capital Territory (FCT), Abuja.

It was gathered that the suspects trained 4000 men at an IPOB camp in Abia State, while another 400 were trained at a camp in Asaba.

Recall that the ESN, known as the armed wing of the Indigenous People of Biafra (IPOB), has been accused of attacking and killing security operatives, as well as burning of police stations across the South East and South South regions of the country.

The suspects had after their dismissal, joined the IPOB militia and gave them trainings on combat operations, ambush and use of fire arms.