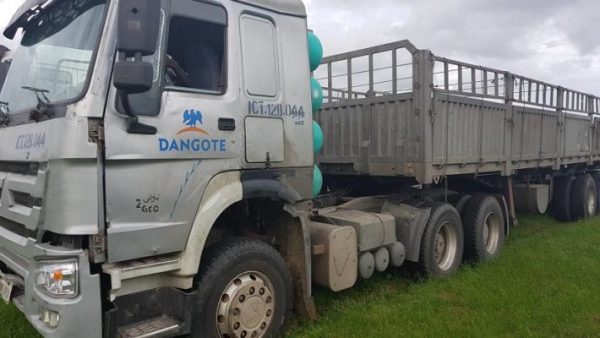 A driver using a Dangote Sugar Refinery truck to allegedly smuggle rice has been arrested by the Nigeria Customs Service (NCS) said on Tuesday.

The Abuja commandant of the NCS, Hussein Ejibunu, said that two accomplices were arrested alongside the driver at Suleja, Niger State.

He said the truck was carrying 750 bags of 50kg foreign rice valued at about N55.5 million from Ilorin to Abuja when it was intercepted at about 2:00 a.m. on Saturday.

He said an investigation was ongoing to unravel the owner of the rice and the person who would have received the consignment and assured that they would be prosecuted.

“As you can see, Dangote trailer was used to carry these bags of rice.

“The Dangote Group of Companies adds an economic advantage to the country; it does not engage in smuggling.

“Our preliminary investigation shows that it is the driver who decided to use the trailer to carry the smuggled rice.

“Dangote is a multinational company which works towards uplifting Nigeria. Obviously, the driver has an ulterior motive. We shall fish out the owner of the rice by the time we conclude the investigation,” Mr Ejibunu said.

Meanwhile, the truck driver, Rislan Jafaru, claimed that he did not know what he was carrying in the truck until he was arrested.

Mr Jafaru said he was very tired when he was approached to carry the goods from Ilorin to Abuja not knowing that it was smuggled rice.