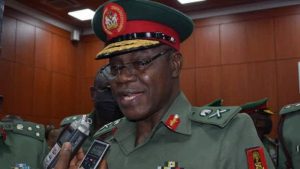 He stated this while speaking with journalists after he was promoted to the rank of lieutenant-general on Wednesday.

He expressed that many of those disturbing the peace “have been sent to God to go and answer for their crimes.”

Following the ceremony, the army chief pledged his loyalty to the president and the country.

“I want to most sincerely appreciate the President and Commander in Chief of the Armed Forces for the confidence reposed in me and now being decorated lieutenant general, he said.

“I want to pledge my unalloyed loyalty, on behalf of the officers and men of the Nigerian Army. We would also continue to do our very best to arrest the current insecurity, which includes insurgency and other violent crimes.

“We are already getting successes and we will leverage on that including our experience in this job and by the grace of God we will get there.”