In the last few weeks, Nigeria has witnessed a resurging number of COVID-19 cases and this has led to increased cautionary warnings from the government across all levels, yet lives have continued as usual for Nigerians.

This new wave of the virus has been spurred by the emergence and spread of the new variation of the virus known as the Delta variant in Nigeria. However, if you have been vaccinated, how worried should you be about the new variant? What new precautions are called for? Here’s what to know about the fast-spreading variant and how to stay safe and protect others.

What is the Delta variant?

There are different variants of COVID-19 namely Alpha, Beta, Gamma, Delta, and more recently, Lamba. The delta variant, originally known as B.1.617.2, has been around since late last year, but since March it has quickly become dominant in many countries. It accounts for more than 80% of newly diagnosed cases in the US, according to the Centers for Disease Control and Prevention (CDC). This new variant is reported to have different symptoms from the classic signs of COVID-19: cough, fever, and loss of taste or smell. According to the COVID symptom study by ZOE, the new symptoms include a runny nose, sore throat, and headache.

It is important to point out that it is not related to the oil-producing state of Nigeria known as Delta State.

How fast is it spreading?

This variant of the virus is spreading faster than other variations. The World Health Organisation established that the Delta variant has certain mutations that allow the virus to adhere to human cells more easily and that experts are also seeing a higher viral load in individuals infected. The Organisation goes a step further by tagging this new variant as “dangerous and the most transmissible SARS-CoV-2 virus to date.”

In terms of the global spread of the new variant, based on the weekly report of the WHO, the Delta variant has been recorded in over 135 countries, a rapid rise from the 85 countries recorded at the beginning of July. Africa is witnessing an aggressive third wave with case numbers climbing faster than all earlier peaks. For 10 consecutive weeks, the continent has witnessed an increase in the number of COVID-19 cases. At the end of July, WHO’s Director-General, Dr. Tedros Ghebreyesus stated that COVID-19 deaths have increased by 80 percent in Africa due to the highly transmissible Delta variant. 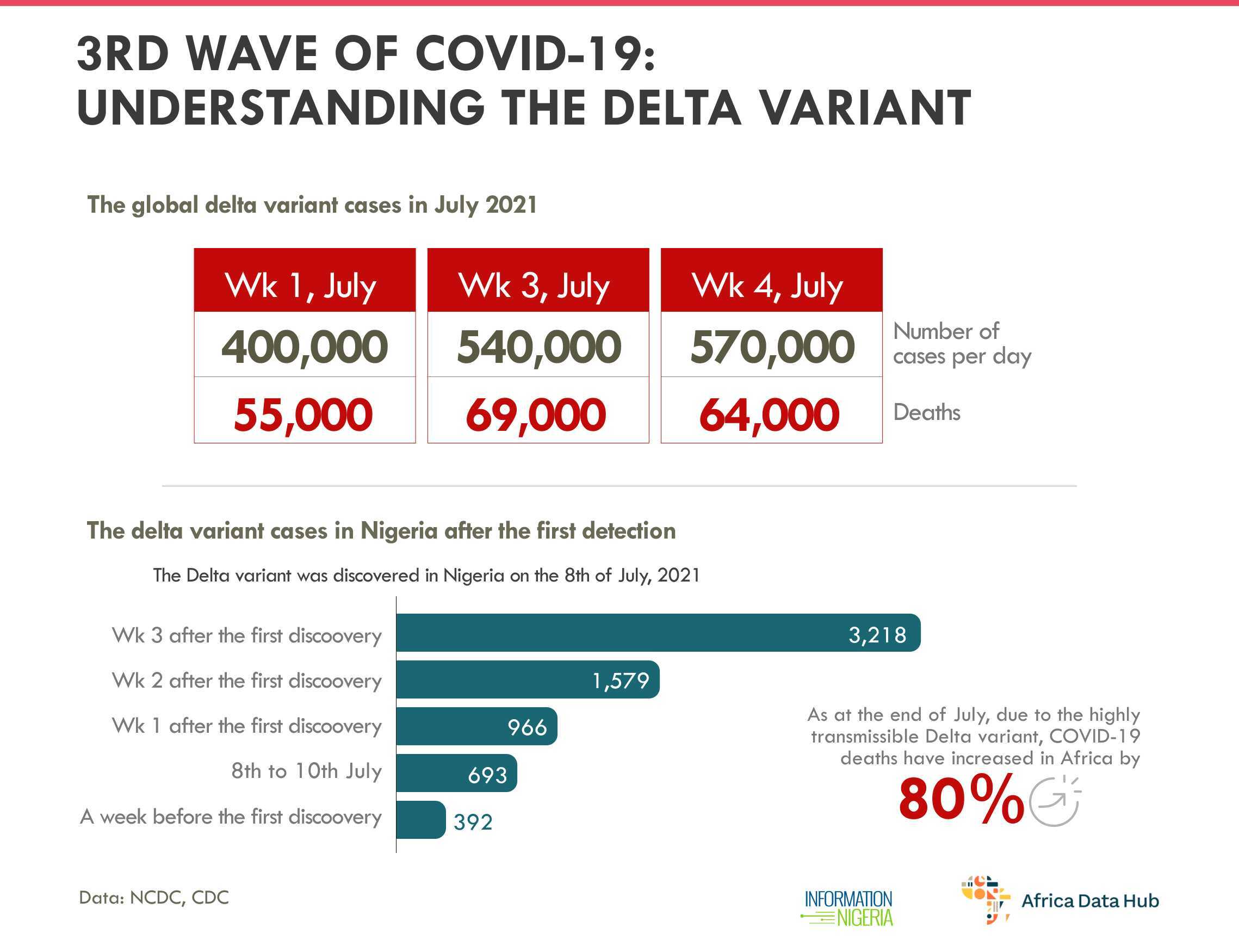 Coming down to Nigeria, the first case of this new variant was detected on the 8th of July, 2021 and at the end of that week, the National Centre for Disease Control (NCDC) reported that cases rose to 693 from 392 the previous week. In the subsequent three weeks following the detection of the new variant, cases have increased to 966, 1579, and 3218 respectively. Deaths from COVID have also increased, rising from 3 in the first week to 17 in the week ending August 1st, 2021.

Can I become infected with the new variant even after vaccination?

The reality is that you can become infected with the Delta variant even if you have taken the two jabs of the vaccine. WHO has stated that vaccines in circulation are not 100% effective against the new strain of the virus. The catch, however, is that the vaccine reduces the severity of illness and the risk of dying from the virus.

Following the above, citizens are advised to follow the guidelines of the NCDC and health agencies to curb the spread of this new virus.