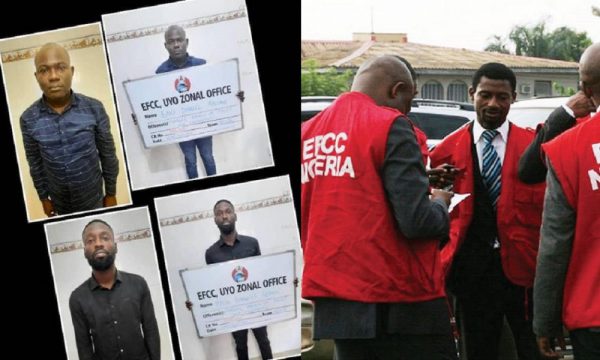 The Economic and Financial Crimes Commission EFCC, Uyo Zonal Command, has secured the conviction of two bank officials identified as Daniel Akpan Eno and Mbuk Idongesit for conspiracy and theft of funds from the account of a deceased commercial bank customer.

In a statement made available on its official Facebook page, the Economic and Financial Crimes Commission (EFCC) disclosed that the duo were served a 3-month jail term with Mr Apkan given an option of N50,000 fine and Mr Idongesit N30,000.

Edem Ita Kufre, the presiding judge, directed that that the convicts be remanded at the Nigerian Correctional Service facility until they pay their fines.

The anti-graft agency said it commenced investigations upon petition from the bank, alleging dubious withdrawal of funds from the deceased account into the accounts of family members and acquaintances, from where they were diverted to personal use.

However, the third defendant, and alleged accomplice, Victor John Okon pleaded “not guilty”. His trial was adjourned till August 10, 2021 for consideration of bail application.