President of the Senate, Senator Ahmad Lawan has expressed that the Petroleum Industry Act 2021 is not perfect and will be amended in the future.

He expressed that enacting the law after so many years is significant even if all expectations were not met.

The three percent allocated to the Host Community Development Trust Fund in the Act has led to outrage.

Lawan told reporters in Abuja on Wednesday: “The host communities are winners as well. It may not be necessarily exactly what some of them had hoped.

“But, from zero to over $500million…and with time, such issues will be further addressed.

“It is about how we can prudently and transparently deploy this $500 million in the host communities.

“This time around, there should be no excuses for anybody to tamper with this money. The host communities have suffered enough.

“This time, the host communities have been specifically mentioned and these funds should go there. We want to see people who will be appointed, taking this as trust and doing what is right.

“Because we are human beings, no Act of human beings could be perfect. So when we can see issues, the National Assembly is there. Bring them for amendment.

“Even the most difficult issues can still be brought back to the National Assembly if it is worthwhile to do so.

“I believe there is no need for us to be emphasising the problems rather than the prospects.” 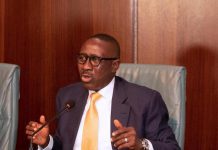