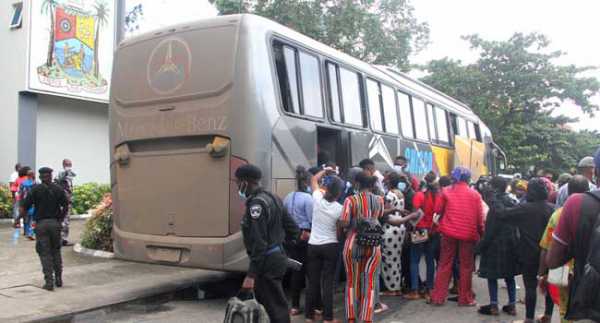 Lagos State Governor, Babajide Sanwo has evacuated a three-week-old baby and 69 students of the state who were stranded in Jos, Plateau State.

The Chief Press Secretary to the Governor, Gboyega Akosile, disclosed this on Friday via a statement, noting that evacuation followed emergency calls from the students who were stranded after some gunmen killed 36 people in Yelwa Zangam community in Jos North Local Government Area of Plateau State.

Accompanied by security agents and government officials, the students arrived at the State Secretariat, Alausa on Friday afternoon with their belongings in a luxury bus and other vehicles after long hours of journey from the north-central state to the nation’s commercial capital.

Sanwo-Olu, who was represented by the State Commissioner for Information and Strategy, Gbenga Omotoso, said welfare packages had been arranged for the students to return to their families safe and sound.

While thanking God that no life was lost in the incident and during the rescue operation, the governor asked them to observe COVID-19 safety protocols and not to lose touch with their studies, as they returned to Lagos.

On their part, the students commended the government for its efforts in evacuating them from the crisis-hit Jos and other parts of Plateau State currently experiencing violence and killings in the last few weeks.

They thanked Governor Sanwo-Olu and top officials of the Lagos State Government for rescuing them from what they described as the ‘war zone.’