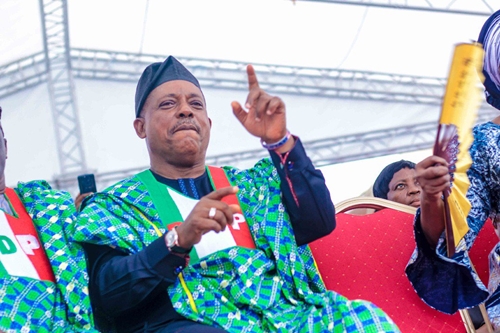 A caucus of the Peoples Democratic Party at the House of Representatives have asked their party’s National Chairman, Uche Secondus, to “honourably” resign from his position.

However, in a statement signed by his spokesperson, Secondus said nothing, so far, warrants his resignation as National Chairman.

The calls for Secondus’ resignation come as PDP Governors met in Abuja on Monday to discuss recent events that threaten the unity and existence of the party.

At least seven principal officers of the party have resigned from the party in recent weeks, although two later withdrew their resignation letters after a meeting of the Board of Trustees.

The PDP has also lost the Governors of Ebonyi, Cross River, and Zamfara to the All Progressives Congress (APC).

According to the PDP House caucus, who met virtually on Saturday, Secondus was more “preoccupied with holding onto his position rather than preparing for next elections.”

They accused him of having “no clear road map, blue print or policy programme for the PDP.”

Secondus was also charged with possessing a “lax and bedroom managerial attitude” which has led to “inept management of complaints, despondency amongst members and consequently an exodus of members of the party at all levels, including a member of the Board of Trustee of the party.”

According to the PDP lawmakers, Secondus should “consider making the necessary personal sacrifice worthy of a leader in the party’s current and future interest with a firm assurance of honourable regard and appreciation by the party leadership now and in years to come, by honourably resigning his position as party chairman immediately, to allow the party an early start.”