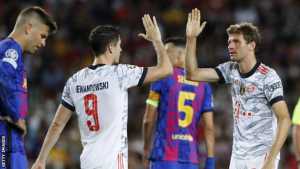 Bayern Munich began its Champions League campaign with a hammering of Barcelona at the Camp Nou on Tuesday night.

Thomas Miller opened the scoring for the German club in the 34th minute with a long range strike that took a deflection from Barcelona defender, Eric Garcia, to open the scoring.

Polish forward, Robert Lewandoski sealed the victory with a brace in the second half scoring in the 56th and 85th minute to top the group.

The other teams in the group, Benfica and Dynamo Kyiev played out a goalless draw.