Kaduna State Governor, Nasir El-Rufai has asked residents to prepare for a shutdown of telecommunication services.

He stated this in a chat with some radio stations on Wednesday.

The governor stated that security agents are prepared to launch an offensive on bandits taking refuge in some parts of the state.

El-Rufai said the shutdown would not cover the entire state, adding that only local government areas bordering the troubled Zamfara and Katsina states where military onslaught is ongoing will be affected.

Also Read: Kaduna: We Have No Plan To Shut Down Telecommunication Services

“But I want the people of Kaduna State to know that if they give us the go-ahead tomorrow [Wednesday], we will shut down tomorrow.”

El-Rufai, who spoke in Hausa, stated that due to the shutdown of telecommunication services in Zamfara and Katsina, some bandits crossed over to neighbouring local government areas in Kaduna to make phone calls and demand ransoms. 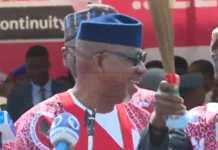