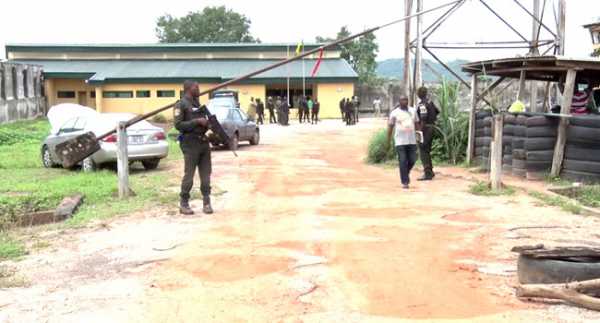 Similarly, two officers of the Nigeria Correctional Service (NCoS), have not been accounted for, the spokesperson for the Ministry of Interior, Sola Fasure, disclosed in a statement on Monday.

The Minister of Interior, Rauf Aregbesola, who affirmed that he had been briefed by the Controller General of the NCoS, Haliru Nababa, described the incident as unfortunate.

Giving more details regarding the event, Aregbesola explained that security officers – comprising 15 soldiers, 10 police officers, and 10 armed guards of the NCoS – on duty “fought gallantly” to repel the attack.

“Regrettably, two officers of the correctional service are yet to be accounted for while one soldier and a policeman lost their lives during the attack,” he said.

The Kabba Custodial facility had 294 inmates as of the time of the attack, many of whom escaped after the gunmen used explosives to destroy three sides of the perimeter fence.

However, 28 inmates refused to escape and some of those that fled have voluntarily returned to the facility as of Monday morning.

According to the minister, the controller-general of NCoS is currently monitoring the situation and a ‘crisis response centre’ has been activated.

He added that a special task force has been mobilised to recapture the fleeing inmates while an inter-agency security task force was on the trail of the gunmen who attacked the facility.