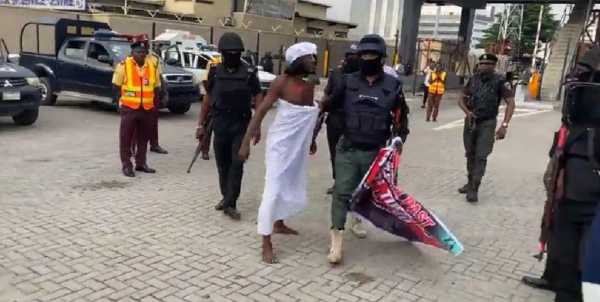 Operatives of the Lagos State Police Command have arrested two protesters at the Lekki tollgate where the #EndSARS Memorial Protest is scheduled to hold in the state today.

One of those arrested claimed to be a journalist while the other was seen carrying a placard.

The police had reportedly warned that anyone seen at the tollgate without an ID card will be arrested.

The arrested journalist told newsmen that he works with LegitTV and that his phone, driver’s license and other documents were taken away from him.

Speaking from a Lagos State Task Force van where he was kept by the police, the journalist who identified himself as Abisola stated that he lost his ID card in transit.

About 30 police trucks and armed personnel are currently at the tollgate to enforce a ban on protests issued by the police command.

A car procession in honour of those believed to have lost their lives at the tollgate when soldiers dispersed #EndSARS protesters on October 20, 2020, is scheduled to hold at the tollgate today.