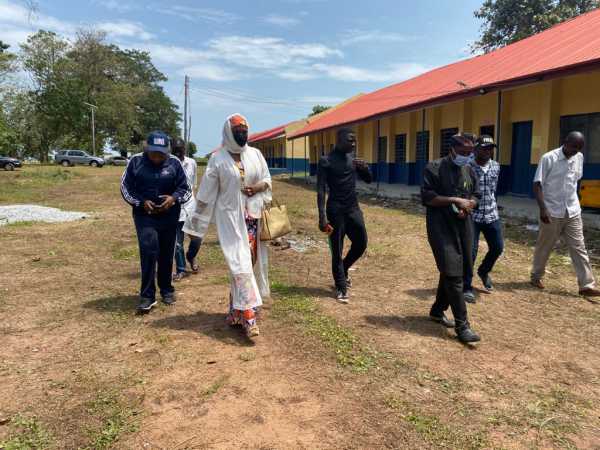 The Kwara State Commissioner for Education and Human Capital Development, Hajiya Sa’adatu Modibbo Kawu, on Wednesday conducted an inspection tour of the newly-opened Police Secondary School(PSS), Ballah, to ascertain the level of work done; and also meet the pioneering staff and students, who resumed for the 2021 academic session, at the weekend.

The Police Secondary School(PSS), Ballah project, was supposed to have been completed and kick started in 2017, after it was facilitated by the Ilorin Emirates Development Progressive Union (IEDPU). Unfortunately, not much was achieved on the project, until the inauguration of the present administration.

On assumption of office, Governor Abdulrahman Abdulrazaq approved a new site for the construction of new buildings for Government Day Secondary school (GDSS), Ballah. Immediately after its completion, GDSS Ballah was relocated to its new site, and the Governor approved with immediate effect, the renovation and construction of the school fence, and new buildings, at the old GSS Ballah, for the Police Secondary school to take off.

After a facility tour, the Commandant of the School, CSP Funke Durojaye, expressed sincere appreciation to Governor AbdulRahman AbdulRazaq, for the investment in the School, and most especially, for partnering with the Nigeria Police Force. She confirmed that more than forty students from different parts of the country have resumed, and learning has commenced.

The Commissioner for Education and Human Capital Development, Hajiya Sa’adatu Modibbo Kawu, welcomed the staff and new students, who came from Niger, Zamfara, Lagos, Ogun, Kogi, Osun and Kwara States. She admonished them on cleanliness; being each other’s keeper; and doing their best in their studies.

Hajiya Modibbo Kawu also commended the Late Chief of Staff, Alhaji Adisa Logun, the former commissioner for Education, Hon. Fatimah Bisola Ahmed, as well as the past and present members of the executive of the IEDPU, and others, who contributed to making the PSS, Ballah project, a success.