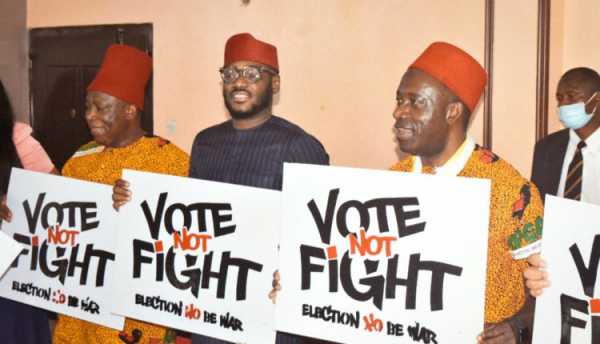 Innocent Idibia who was accompanied by members of his “Vote Not Fight: Election No Be War, “Initiative, told Cee Cee Soludo that he was in Anambra State to preach to the people to embrace peace and shun all manner of thuggery and violence during the forthcoming gubernatorial election in the State.

He remarked that he took up the initiative in order to educate and enlighten the Nigerian public, especially the youths, on the need to maintain peace and orderliness before, during and after elections.

The popular and multi-talented artiste said this was the only way to build a stronger and more united nation when the citizenry imbibe the culture of peace and tolerance during electioneering periods.

He described Cee Cee Soludo as a man of peace and a role model to the Nigerian youths who has brought dignity and respect not only to Nigeria but also to Anambra State.

He equally commended Soludo’s peaceful and orderly electioneering campaign style which he said was exemplary, stressing that the people of Anambra and Nigerians are indeed proud of the manner and ways it is being conducted by his party, APGA.

Responding, Cee Cee Soludo commended the artiste for his laudable initiative in preaching the message of peace to Nigerians. The former CBN Governor reiterated that he has always been a harbinger of peace.

He equally added that Ndi-Anambra has always been peace-loving people who abhors killings and wanton destruction of property.

He stated that the state has had relative peace for the past 7 years under the dynamic administration of Governor Willie Obiano (who is an APGA Governor) until the recent resurgence of what people have described as politically motivated killings.

Cee Cee Soludo, therefore, assured his visitor and members of his entourage that Anambra will remain peaceful and always live up to its creed as ‘the light of the nation’, adding that the forthcoming governorship election will hold in a peaceful and orderly manner devoid of violence, to the glory of God and to the benefit of the good people of Anambra State