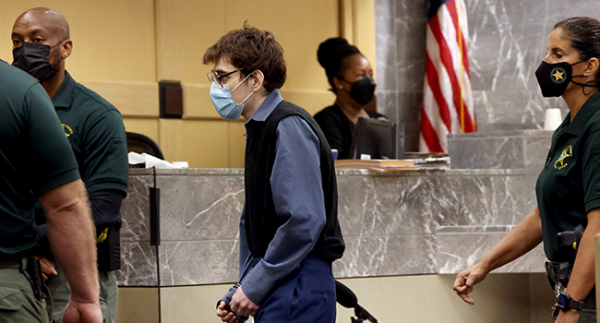 A former student pleaded guilty on Wednesday to killing 17 people in a shooting rampage at a high school in Parkland, Florida, and apologized in court to relatives of the victims.

Nikolas Cruz, who was 19 at the time, took a legally purchased AR-15 assault rifle into Marjory Stoneman Douglas High School, his former school, on Valentine’s Day in 2018 and killed 17 students and staff members.

Cruz pleaded guilty to 17 counts of first-degree murder and 17 counts of attempted murder for those wounded during the attack, which sparked a student-led movement for tighter gun control laws.

Cruz, who was dressed in a blue collared shirt and sweater vest and wearing large glasses and a face mask, responded “guilty” as Judge Elizabeth Scherer read off each of the charges in a Fort Lauderdale courthouse.

He told the judge he was suffering from a “little anxiety” but understood the charges against him and was pleading guilty of his own volition.

Cruz will now go before a jury for the penalty phase of the trial. He faces a minimum of life in prison without parole but prosecutors have said they will seek the death penalty.

The judge set January 4, 2022 for the start of jury selection for the penalty phase.

Following his guilty pleas, Cruz, who is now 23, apologized to the relatives of his victims.

“I am very sorry for what I did and I have to live with it every day,” he said, reading from a prepared statement. “It brings me nightmares.”

“If I were to get a second chance I would do everything in my power to try to help others,” he said.

Addressing relatives of the victims, Cruz said: “I believe it’s your decision to decide where I go, whether I live or die, not the jury’s.”

Relatives of some of the victims were among the spectators in the courtroom and wiped away tears as a prosecutor recounted the attack in chilling detail.