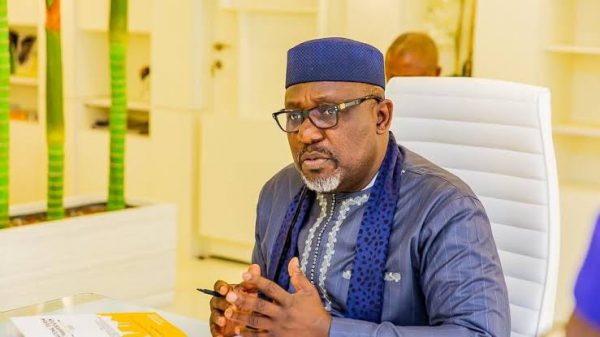 A total of 987 properties has been recovered from a former governor of Imo State, Rochas Okorocha.
The Imo State Government White Paper Implementation Committee on Lands and other Related Matters made the revelation, adding that the properties have been returned to their owners.
Chairman of the committee, Professor Ukachukwu Awuzie, who made the disclosure to Daily Sun yesterday, also alleged that he has been receiving threatening calls from strange people while trying to complete the task before him.
Awuzie noted that the number returned excluded so many others the White paper recommended for investigation.
He said: “I don’t know the number yet, but it has been published; according to the White paper, those who have challenges are about 987. There are so many other people whose land the White paper said, investigate and find out if the acquired land is within a government area, and we have not done that,” Awuzie said.
On the threats he said “basically there are no serious challenges because we have the maximum support of the State government and agencies. I was an ASUU president, I don’t reckon with threats. I know the God I serve will have to do what is right at all times; we would all meet our creator one day.
“Yes, I have been receiving some strange calls, but they will not distract me from what I’m doing now, I don’t answer any calls. I don’t know who the caller is again,” Awuzie confessed.
Speaking on other discoveries, the committee chairman said they discovered that all of the process of land revocation and allocation during Okorocha’s administration never followed due process.
He said: “What was alarming was that the government was run without due process and all the challenges we had arose from the government not following due process.
“If you want to revoke lands, there are processes; you don’t revoke personal land and turn it to personal use.
“You can only revoke when there is a compelling government use at that moment; you don’t revoke land and give it to your families or friends.
The committee, in their seat last week, had accused Senator Okorocha of partitioning and appropriating the properties located in various areas of the State to himself and his family members.
AdvertisementABUJA DOCTOR REVEAL THE UNIQUE WAY TO PERMANENTLY CURE WEAK ERECTION, SMALL AND SHAMEFUL MANHOOD AND INFERTILITY ISSUES WITHOUT SIDE-EFFECTS WITHIN SHORT PERIOD!! DON'T BE A VICTIM!! Click Here for More Details