Vice President Professor Yemi Osinbajo has expressed that work of centers such as the International Centre For Yoruba Arts and Culture could become a base for how culture can help in building a more inclusive, fairer, and more just society.

Osinbajo was speaking this afternoon at the launch of the Centre in Ibadan, the Oyo State capital.

He added that the Centre could strengthen the bonds of unity within an ethnically diverse nation such as Nigeria.

“The work of this Centre should also offer a base and sanctuary which reflects how Yoruba culture can contribute to the tools of nation-building,” the VP stated.

Osinbajo asked, “how can the rest of the nation learn as President Buhari observed, from the way Yorubas manage within their families to accommodate diverse faiths and beliefs?

“At a more reflective level, we will through this repository and the traditions embedded in the artworks and cultural artefacts, imbibe the triumphs, challenges, inventions, and spiritual heritage of the Yoruba people.

“And how here at home, Yoruba culture also had to adapt to the onslaught of colonialism in Nigeria by the British and in Benin and Togo by the French. In ‘Death and the King’s Horseman’, a classic play by Professor Wole Soyinka, we see forces at work that tried to adapt cultural practices with tragic consequences.” 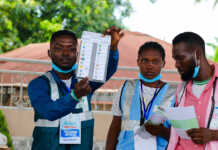