The letter was read in plenary sessions of both the Senate and the House of Representatives, a day after it was reported that Buhari had refused to sign the law.

The Senate had gone into a closed-door session to debate the letter’s content before it was read.

Senator Lawan read the letter in which President Buhari explained his actions after the session.

Buhari justified his decision in the letter by citing the direct primaries clause. 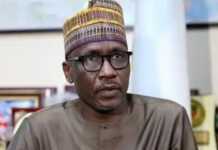