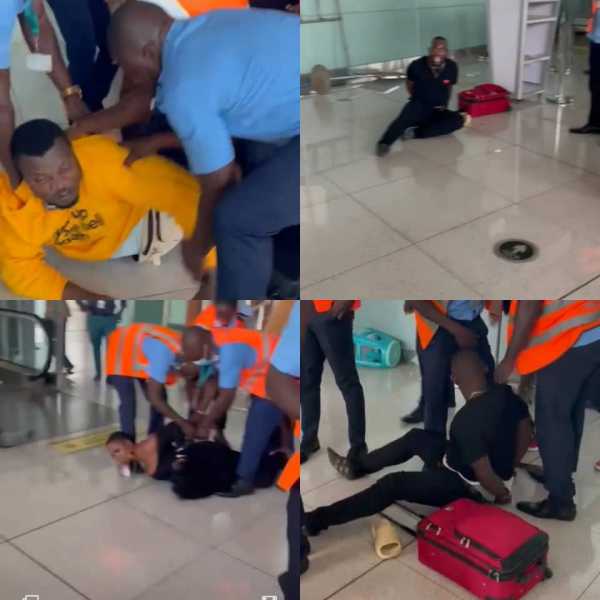 The Federal government has condemned a video in which Nigerians were being assaulted at a Togolese airport.
It was gathered that the victms were traveling to Nigeria via the Gnassigbe Enyeama International Airport in Togo when securty operatives assaulted them.
A video that went viral over the weekend showed the Nigerians being manhandled by some Togolese security agents.
According to the travellers, they left the US en route to Nigeria and had to stop over in Togo for a connecting flight. However, they were told by the Ethiopian airline authorities that the plane was full so they wouldn’t be continuing the journey. This got the Nigerians angry and they started protesting. The Togolese security agents came in and got them arrested forcefully.
Nigerians who have seen the video condemned the treatment meted on the travellers.
Reacting to the development, the Embassy of Nigeria in Lome, Togo, registered its displeasure with the host country over the maltreatment of the Nigerians stating that it was totally unacceptable and not in accordance with international best practices.
Nigeria’s Ambassador to Togo, Debo Adesina, in a statement released, stated that through concerted efforts by the mission in its engagement with relevant Togolese officials, the matter is being addressed. He stated that immediately the incident was reported, he and his officials were at the airport on Saturday and took up the matter until it was resolved and all the passengers were successfully evacuated on two flights.
Ministry of Foreign Affairs Spokesperson Esther Sunsuwa also confirmed to The Nation that the matter was resolved Saturday night and the passengers were conveyed to Nigeria the same night.
Watch the viral video of them being manhandled below: