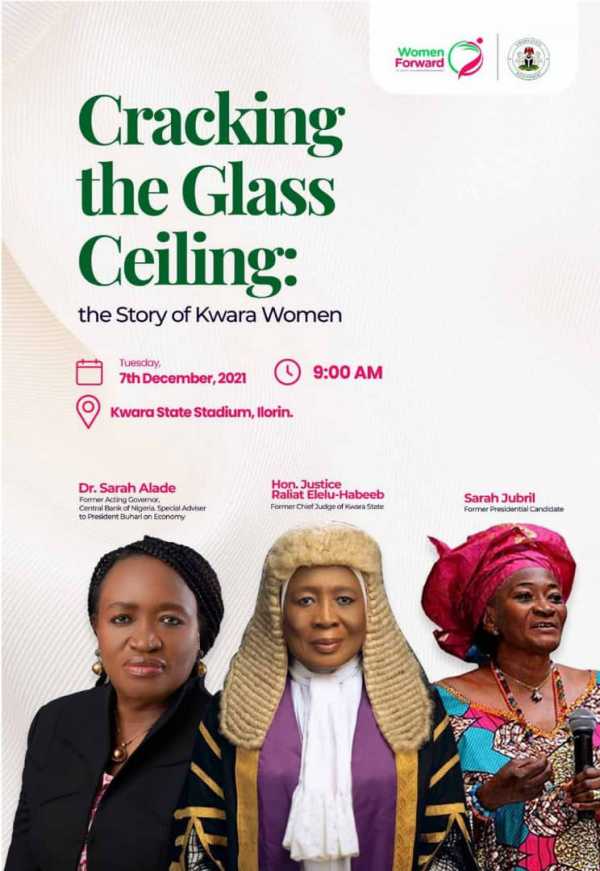 Women from various walks of life will on Tuesday converge on Ilorin, the Kwara State capital, as the state government hosts a conference that is meant to acknowledge the roles and contributions of women in the development of the state.

Themed Cracking the glass ceiling: the story of Kwara women , the conference will feature prominent women from within and outside of the state who would speak to the strides of the female folks, highlight their concerns, and discuss the way to mainstream gender inclusion within the state’s socioeconomic and political milieu and beyond.

The event will also be attended by prominent serving and retired public officers/civil servants, including former Chief Judge of Kwara State Justice Raliat Elelu-Habeeb; former Deputy Vice Chancellor of University of Ilorin Prof. Sidikat Ijaiya; and dozens of other female eggheads and entrepreneurs.

The programme will be keynoted by former chairman of First Bank of Nigeria and business woman Ibukun Awosika; Alade; Jubril; Elelu; United Nation’s Amina Mohammed; and National Missioner of the Ansaru-Ud-Deen Islamic Society of Nigeria Sheikh Abdulrahman Ahmad; among other prominent personalities.

Merit Awards will also be given to Kwara female achievers and initiatives.

“This programme — Cracking the Glass Ceiling: the story of Kwara Women — serves to acknowledge and appreciate the huge contributions women make to our community, as well as encourage the Kwara girl child,” according to a statement from the planning committee.

“The event is another in the series of the Abdulrahman Abdulrazaq administration’s efforts to mainstream gender parity, empower women, and build a society that truly gives everyone a fair chance.”