A Nigerian lady has narrated how she couldn’t have sex with her husband for months after she got married as a virgin. 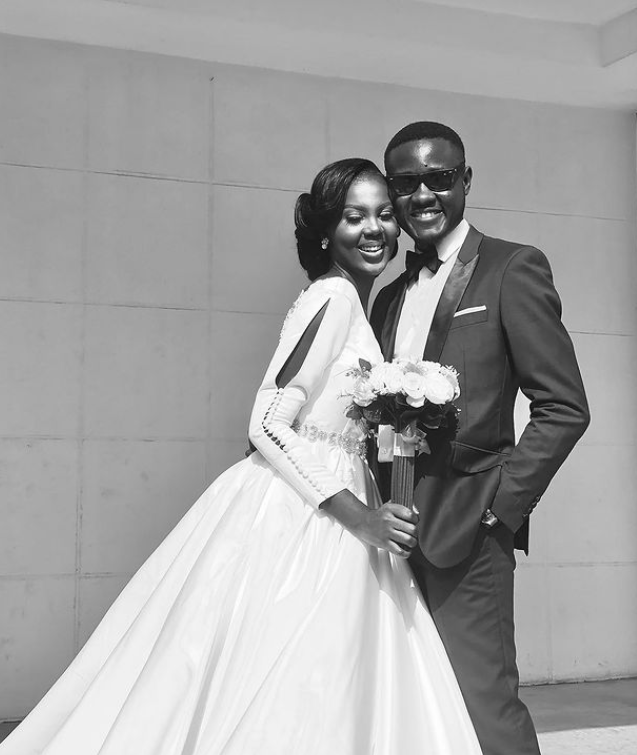 @Titothewriter who shared some of the traumatic experiences she faced including getting violated by a doctor, disclosed that she and her husband had to find other ways to enjoy each other even after undergoing a surgery over not being able to consummate their marriage.

A WHOLE YEAR AFTER

As hard as I tried, I never was the little girl that had dreams about her wedding. For the most part, I just wanted the major stakeholders to be happy. Let everyone enjoy themselves and have money after the wedding.

Therefore, when the situation arose that warranted a privately intimate wedding, it wasn’t much of a bother to adjust because the picture of happiness I had did not warrant anything happening.

However, as much as I never thought any preconceived ideas of what my wedding would look like, I knew what it wasn’t going to look like. And for the life of me, it was not that my husband and I would have a major issue with consummating our marriage (properly) for months!

The issue is called Vaginismus and no, I’m not ashamed of it so please don’t help me to be ashamed of what I’m not ashamed of. Vaginismus is more of a mental condition than it is a physical one. So imagine my surprise when the honeymoon I had pictured was laden with pain, tears and fatigue! Oh I cried! I cried so hard! Because we had fought to get to where we were! People were congratulating us and we were grateful but what was this?

The pain? Excruciating raised to a power of 1000! I was in pain! Intense, serious and body shaking pain. My husband hurt from watching me writhe in pain. What was a lubricant? What didn’t we try?

A few weeks after, nothing had happened and I was very tired of hearing “just close your eyes…” “you’re imagining the pain…” “it’s not that hard.”

I went to a gynaecologist at Iwaya…

To be continued tomorrow because tears have filled my eyes now

On the 26th of January, exactly one month after our wedding, I decided to seek medical help. I drove myself to the hospital at Iwaya, Yaba. This was my first ever gynecologist visit.

I explained to a general physician first and then I was referred to the CMD of the hospital. I remember walking in head down in shame, as if I brought it upon myself. That part does not work again sha.

I sat in front of this thick man with no name card or plaque in sight. Not on his door, table, or overall, I should have walked away but I did not because I did not even know what to expect.

I explained everything to him, in between tears. I literally felt I could not do anything, no matter how much my husband encouraged me. “How long did you people date for?” he asked almost eyeing me. “2 years and 8 months.” I answered. “So you people dated for close to three years and you didn’t have sex?” Now he was irritated. “No, we didn’t.” I was smiling, trying to change the topic. “So the rest of us are sinners? Abi? Look at it now? Three years, no sex?” His words felt like a dagger in my heart because at the time, I was already asking God why He asked that we remain sexually pure if the process of deflowering was this painful. This man asked me almost five times if I’m sure I’m a virgin. I answered that I clearly am. Except for the sexual abuse that happened when I was a child which would have obviously sponsored that reality!

He went ahead to minimize everything I said. And then asked me to lay on the examination table. After checking the first time, the guy said there’s a seal than can easily be removed with his fingers. Brethren, those were the worst three minutes of my life. I fell from the table as I ran from this pain. The pain was about to numb my ears and my feet. I screamed but it came out as muffled groans because tears poured too much. The matron he had sent for had to shout at him to stop!

I couldn’t drive home after than incident. I had to call my husband to come get me. Tears didn’t stop for almost an hour. I kept crying and crying!

At that point I vowed to encourage premarital sex but…

As we drove home from that silly doctor, I was very quiet. The tears did not stop. At this time, I wasn’t trying to cry. My body just was exhaling. My body knew it had been violated. My husband would have gone to bring the place down but the issue at hand was more serious to me than getting the idiot to pay.

He had told us to try that night but we could not. We could not even try that week. I bled for about two days too. At this point, I was sure that I was going to be an ambassador for premarital sex! God had deceived me, I was going to get Him back!

Then I called my aunty. She’s a top consultant in Ibadan and long story short, we were in Ibadan, University College Hospital, the next week.

The professor we saw? Oh what an amazing man!!!! He cried with me, he consoled me, when it was time to examine me, he encouraged me when I hesitated a couple of times. I started crying on the examination table without anyone touching me. After examination, he prescribed Lidocaine (a numbing lubricant) and said we should try but if nothing happened, the surgery would be carried out.

Thursday that week, I was in UCH for a surgery! I was completely put under. I didn’t even know when I slept off. They called it digital dilation. My husband was a rock! A complete support and Aunty D too! My mum could hardly sleep or breathe, oh I don’t want to go into my mum’s reaction! It’s too much! The woman was literally broken.

Anyway, brethren, after spending the little we spent and the time, and my body being knocked out for two weeks after that surgery. I was dizzy for two weeks non stop.

The. Surgery. Did. Not. Work! At this point, I lay on the bed and asked God what I had done to deserve this pain? Shebi if it was just difficult, it would have been different. The pain was completely beyond me! It would reverberate underneath my feet almost numb my ears! It wasn’t a cute pain or a bearable pain!

The professor had told us that if the surgery did not work, we were to return for a procedure where I’ll be numbed waist down and then we try in view of professionals! Samuel swore that it will never be him or his wife! So that was a no-go area!

When we returned to our base, we both decided to leave it. We were tired. As in I was very tired and we were barely two months into the marriage.

What was worse? I hadn’t even asked God anything. Everything we had done up until that point, we did with our logical calculation. I didn’t even consider God. I didn’t ask if it was His will, I became Uzzah and ran to help God. I didn’t realize what I’d done until HS and I had a conversation and He chided me gently. I cried.

Aunty D and the Professor kept calling to find out the progress we had made and I had to gently tell her to leave it be. My mental health had taken such a hit that I could not even have anyone constantly checking on us.

We needed to unlearn the expectation that penetrative sex was the ultimate goal, it is not. Sexual satisfaction is. Find what works for you and do it well.

Then came a program called “Sex, Love and Goop” on Netflix. There were many things I did not agree with in that documentary but our breakthrough came through a procedure on the show; Calculated breathing.

I realized that what my body was doing was natural. It was preventing me from an “anti-body” and the reflex action was to close up. When I consciously take calculated breaths before we begin, I allow my body to relax. I also began to have conversations with my mind “This is good for me. This is good for us. He is one of us now.” In. Out. In again. Out again. Slight pain. In. Out. Deeper. In. Out.

Like that, we. won. Whoosh! God! The first time, it still hurt but it was bearable. The second time, the pain was more bearable and like that, Jesus got the victory.

Relax. Rest. Enjoy yourselves. There’s more to marriage than sex. Trust me. By the time you get the victory, sex will be an added bonus. You can be intimate without penetrative sex.

Here are some lessons that I got from the situation:

1) Marriage is warfare. It makes no scriptural sense that those who have preserved themselves, with the help of God, for marriage should find that much pain before they derive pleasure. Some people are still stuck there even after children. It cannot be God’s promise. This is why prayer with a lot of thanksgiving is something no marriage should scrimp on. Please pray so much and so well and make sure your thanksgiving is more than your prayer point. It is warfare that has already been won.

2) When something is beyond you, give it to the Person beyond life and leave it there. Vaginismus is not your fault. You didn’t cause it. Therefore, rest!

3) The mind can be retrained. Your body has “prevented” you from sex all your life. Therefore, mild exercise like calculated breathing, kegel exercises and the likes will help retrain your mind.

4) Sometimes, there may be something else you need to work on. In our case, there was an hidden issue on my husband’s part. We spent almost a month detangling and removing and in two weeks after all was settled, we had a breakthrough. I’m not saying you should become a paranoid CIA agent. I cried out to God one day in tiredness and asked Him to show us if we had anything that sponsored the delay. Immediately after that Hannah like prayer, things began to unfold. Please PRAY!!!

5) God never wastes situations. The amount of couples that have been saved since the 27th of this month is such a miracle. One day, God told me that He walked me down this path because He needed someone to deliver His babies! So I’m not just talking, angels are backing me up! There is purpose in your pain, child of God! If all you see is your pain, you will lose sight of God. 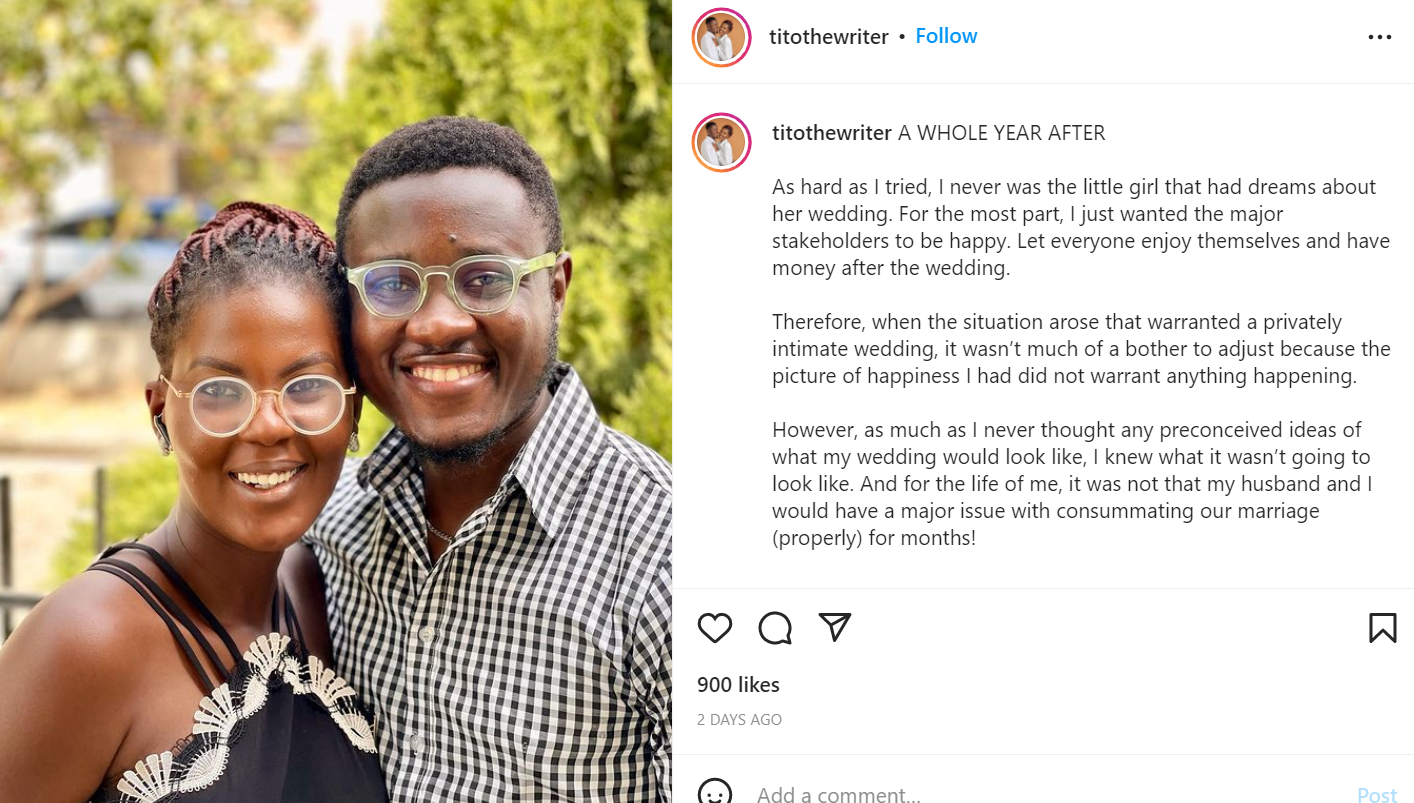