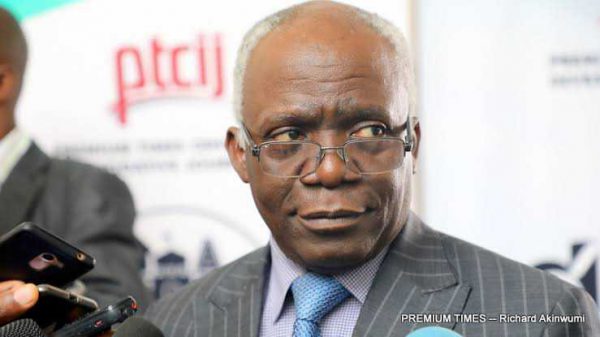 Femi Falana (SAN), the popular Nigerian human rights lawyer, has said that the legal advice issued by the Lagos State Director of Public Prosecution, Adetutu Osinusi, exonerating the staff and five students of Dowen College arrested over the death of an 11-year-old student of the school, Sylvester Oromoni, was hasty.

It earlier been reported that the DPP in its legal advice sent to the police and the court trying the case of Oromoni’s death, stated that the two autopsies conducted on the body of the deceased failed to establish a case of murder and that a final autopsy report issued by the Lagos State University Teaching Hospital and toxicology report of post-mortem samples established the cause of death as Septicaemia, Lobar Pneumonia with Acute Pyelonephritis, Pyomyositis of the right ankle and Acute Bacteria Pneumonia due to severe Sepsis and that no harmful substance was found in late Oromoni’s body.

The state government, therefore, concluded that based on the findings, there was no prima facie case of murder, involuntary manslaughter and or malicious administering of poison with intent to harm against the suspects including Favour Benjamin (16), Micheal Kashamu (15), Edward Begue (16), Ansel Temile (14) and Kenneth Inyang (15).

Reacting to this development, Falana who is the counsel to the Oromoni family, said the legal advice had not laid to rest allegations of murder levelled against the suspects. He argued that the legal advice was hasty owing to the fact that the Chief Coroner of Lagos State ordered that an inquest be conducted into the circumstances surrounding the unnatural death of Sylvester Oromoni.

The inquest which commenced before the Coroner on December 16, 2021 has been adjourned to January 15, 2022 for further hearing, Falana noted.

His statement reads: “Our attention has been drawn to the report issued by the office of the Director of Public Prosecutions of Lagos State dated January 4, 2022 which has purportedly cleared five students and five employees of Dowen College of any complicity in the death of the 12-year old Sylvester Oromini Jr.


The inquest which commenced before the Coroner on December 16, 2021 has been adjourned to January 15, 2022 for further hearing.”