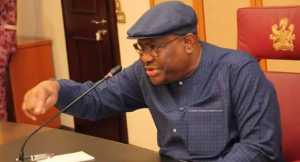 Nyesom Wike, the governor of Rivers State, has stated that the country’s judiciary is becoming increasingly perplexing and contradictory in its judgments.

Wike also stated that the continuing disagreement between Rivers State and the Federal Government over the legitimate jurisdiction to levy and collect Value Added Taxes has significant constitutional consequences that needed to be addressed.

On Friday, the governor spoke at a book presentation in honor of retiring Justice Anwuri Chikere of the Federal High Court, titled “Contemporary Essays on Law and Practice.” He also blamed the Supreme Court for the ongoing debate over state governments’ VAT collection.

Wike emphasized that the judiciary was the sole authority through which all persons, authorities, and agencies were subjected to the Constitution’s precepts and commands, as well as the nation’s ordinary laws.

He stated that without a strong, independent, and functioning judiciary, no nation can be perceived as free, fair, or just, and that no democracy can survive, prosper, or achieve social and economic progress without a fearless, efficient, and effective judiciary.

As a result, he urged judicial officials to return to a time when the nation’s judiciary was truly independent, staffed by brave men and women who could be trusted to dispense justice fairly and equally to all.

Wike added, “There was also a time when our judges were respected the world over for their independence, courage and credibility. Again, time was that decisions from Nigerian courts were widely accepted and celebrated across the world as timeless models of judicial precedents.

“But today, what is your candid assessment of the character and integrity of our country’s judiciary, which is becoming more confusing and painfully contradictory?”