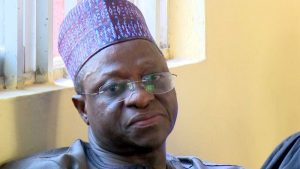 The process to formally take over some known assets of convicted former governor of Plateau State, Joshua Dariye has been initiated by the Federal Government.

The Economic and Financial Crimes Commission (EFCC) made the application to the Federal High Court in Abuja for an order of final forfeiture in that regard.

One of such assets belonging to Dariye at Plot 1802 A04, No: 19 Fredrick Chiluba Close, Asokoro, Abuja, was identified by EFCC in the application filed by a lawyer in the team that prosecuted Dariye, Oluwaleke Atolagbe.

According to the EFCC, the court had, in the course of Dariye’s trial, granted the government’s request for an interim forfeiture of the assets pending the conclusion of the trial.

EFCC explained that since the trial had been concluded and Dariye jailed for criminal breach of trust and dishonest conversion of about N1.2billion belonging to Plateau State, it was proper that the court order the final forfeiture of the convict’s known assets.

“The applicant (the EFCC) sought and obtained an interim forfeiture order of the respondent’s (Dariye’s) assets and properties inclusive of the property at P No 1802 AO4, No. 19, Fredrick Chiluba Close, Asokoro pending the determination of the charge against the respondent.

“The charge against the respondent (now convicted): FCT/CR/81/2007 between Federal Republic of Nigeria vs. Chief Joshua Chibi Dariye was determined resulting into the respondent’s conviction.

“Both the Court of Appeal and the Supreme Court upheld the convict on of the respondent.

“The apex court affirmed the conviction of the respondent on the charge of criminal breach of trust punishable under Section 315 of the Penal Code and also that the N1,161,162,300.00 belonging to Plateau State Government had clearly been dishonestly converted by the respondent to his own use by the intricate dishonest contrivance.

“By the decision of the Supreme Court in Chief Joshua Chibi Dariye vs. FRN, appeal No: SC/1206C/2018, delivered on the 12th March, 2021, it is affirmed that Ebenezer Retnan Ventures, an unregistered company was involved and used to commit the crime for which the respondent was convicted.

“By the decision of the Supreme Court in Chief Joshua Chibi Dariye vs. FRN, appeal No: SC/1206C/2018, delivered on the 12th March, 2021 at page 41, it is affirmed that there are credible evidence that the respondent was masquerading in the name of Ebenezer Retnan Ventures, an unregistered company to cause wrongful gain to himself.”

The applicant then wants the court to issue “an order for the final confiscation and forfeiture of Plot No. 1802 AO4, No. 19, Fredrick Chiuba Close, Asokoro being respondent’s property and asset wrongfully acquired as a result of the crime for which the respondent was convicted in charge No: FCT/CR/81/2007 between Federal Republic of Nigeria vs. Chief Joshua Chibi Dariye.”

At the mention of the application on Friday before Justice Inyang Ekwo, none of the parties was represented, prompting judge to adjourn it till June 16, 2022.