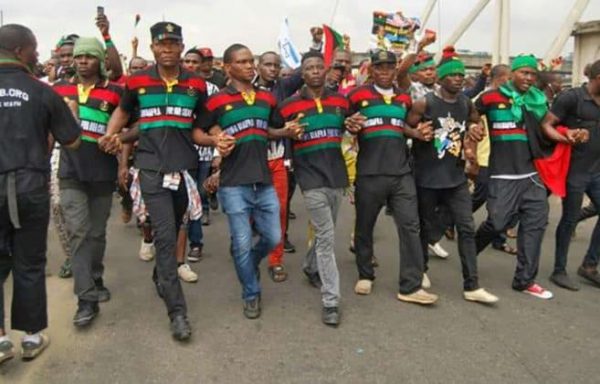 The Indigenous People of Biafra, IPOB has made a revelation concerning unknown gunmen attacking and killing innocent people in the Southeast.
According to IPOB, the Eastern Security Network, ESN are not unknown gunmen.
IPOB said southeast governors created unknown gunmen to demonize the group, ESN, and its leader, Nnamdi Kanu.
The group said its militia arm has no hands in the recent attack at the Isu Local Government Area Divisional Police Headquarters by unknown gunmen.
A statement by IPOB’s spokesman, Emma Powerful reads: “We, the global movement and family of the Indigenous People of Biafra (IPOB) ably led by our great leader Mazi Nnamdi Kanu wish to reiterate once again to the general public that IPOB volunteers and ESN operatives are not unknown gunmen contrary to allegations by the Nigeria Army, Police and DSS agents. we have warned Nigeria security agencies to stop linking ESN operatives and IPOB volunteers or members with the hoodlums behind the kidnappings and snatching of cars in the region.
“It is absolutely clear to all and sundry that Nigeria Government and security agencies and their evil politicians created the unknown gunmen in the region particularly in the Imo State because the state government wants to demonise IPOB and our leader Mazi Nnamdi Kanu.
“We have also, severally explained that our ESN operatives stay in the bushes and forests safeguarding our mothers, wives and sisters who have been the victim of rape and killings by Fulani terrorists masquerading as herdsmen.
“ESN had no hands in the recent attack at the Isu LGA Divisional Headquarters of Police by unknown gunmen. Those attacking them are those they created to demonise IPOB and its leader Mazi Nnamdi Kanu. Ironically, the monster they created to destroy ESN has turned around to hunt them. They should leave IPOB and ESN out of their problem.”
IPOB said the demon the police, Nigerian Army, and Department of State Services, DSS, created in unknown gunmen would continue to hunt them.
Powerful insisted that Governor Hope Uzodinma of Imo State created unknown gunmen.
“The demons the Nigeria Police, Nigeria Army and DSS nurtured will continue to hunt them until they openly confess their atrocities against Biafra. They must come out openly and speak up on the mystery behind the UNKNOWN GUNMEN and cannibalism in the region. IPOB is the only obstacle they have yet they keep pointing accusing fingers at us for the same evil they committed.
“The government of Imo State under the watch of Hope Uzodinma created unknown gunmen and now using Ebubeagu security outfit to accomplish his aims to eliminate our innocent citizens and youths in the state.
“Ebubeagu is now the major cause of death in Imo State. They were recruited and given orientation to harm our people and blame it on IPOB and ESN. But they will not succeed in this evil mission.
“Nigeria police should go and look for those who attacked them at Isu LGA, not IPOB. The worst thing is that they know where those attacking them are staying but they keep on mentioning IPOB and ESN members. We are well ahead of them, and police cannot humiliate us with their fallacious and laughable allegation and media trial. We cannot accept that garbage,” he added.