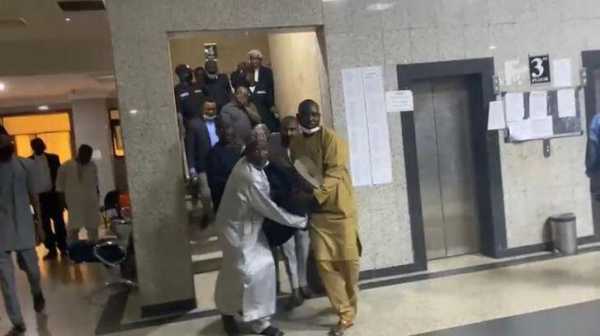 Wife of the disgraced Deputy Commissioner of Police (DCP) Abba Kyari has fainted.
She fainted at the Federal High Court in Abuja on Monday.
It was gathered that the incident happened while armed operatives of the National Drug Law Enforcement Agency (NDLEA) were leading Kyari and the other drug deal suspects away from the court premises.
Kyari who is facing fresh drug trafficking charges brought against him by the NDLEA, pleaded not guilty before Justice Emeka Nwite of the Federal High Court, Abuja on Monday.
The NDLEA had filed eight counts of hard drug trafficking against him and six others.
Read Also: Abba Kyari To Remain In Custody As Court Fixes Bail For Mar 14
He is also being charged with obstruction of justice through attempted bribery of NDLEA personnel.
Kyari also has a pending case with the police as he is being investigated over his alleged link with international fraudster, Hushpuppi.
Watch video below: