Popular Nigerian Actress, Annie Idibia has called out her elder brother, Wisdom Macaulay after he accused her of introducing him to hard drugs.

Recall that the disgruntled man who shared a lengthy video on Instagram revealed that the actress is a drug addict and introduced him to it.

He claimed that Annie Idibia has turned him into her slave as she always denies him payment after working for her.

According to Wisdom, currently his life is allegedly being threatened by his sister who is capable of doing scary things due to the drugs she takes.

Reacting to this, the actress accused her brother of being irresponsible. Apparently, their rift began after she refused to make him her manager. She additionally alleged that she has been liable for the maintenance of his household for a very long time.

Annie mentioned that her brother had a number of occasions threatened to kill himself over petty causes.

She lastly suggested him to cease performing like he is entitled to cash and leave her household alone.

“Oh Wizy….why big bro why…
Wisdom….why all these lies against your ONLY sister…ur younger sister, all I ver do was protect you n ur kids…
Since we grew up bro, have u ever paid for house rent in your entire life? You live in a 3 bedroom flat fully furnished with everything u need for u n kids.

Wisdom u have 3 kids, have u ever paid for their school fees since they were born? Your oldest 9 for 9 years since ur wife start making babies..have u ever paid for hospital bills for any of your kids? Have u ever paid school fees? Oh Wizy how many cats have I bought for you..since God started blessing me! You say work for me…how??? Where???? After dad died…the car I had bought for him told u to service the jeep.. you sold d car without telling me..all I have was love u n your kids!! Every Xmas I make sure they all get something new…I even make sure ur wife isn’t aware! How many times have I given u millions Wizy, how many times….but u are way too irresponsible, bcos I don’t have the heart to watch ur kids go hungry! Keep blackmailing me that u will kill ur self! I have receipts on my online banking. N proof! Why do you wanna destroy this lil careeer I have worked so hard to make…this is where I make 80percent of my money! Same money I used to send ur kids to school..pay ur rent! All ur hospital bills! Why would you want to destroy your own sister”.

Annie Idibia added, “Just yesterday ur wife called crying they sent your kids home….for sch bus…money I already gave u since! I paid straight to the school. Why Wizy! I want to be manager… I said “I am sorry I don’t think it’s something I can do…till u get the help you need… How many cats have I bought for you bro? How many? I duped my friend n had to pay! You took 2 different loans from banks… I had to pay for you..just so it doesn’t get out of this space! Wizzy what more can I sister do! What? I have my family too..m. I hate all these lies why! I am at the peak of my career! Pls bro…why this lies!!! JUST BECAUSE I SAID U CANT BE MY MANAGER! I have so many voice notes from ur wife! I won’t disgrace u n put it out here! I am tired! Do as u like! The universe will protect me, my hard work, my kids, my family. Let the world believe anything! My name is Annie! I am not the lies you are saying! I work dm hard…not lazy! Entitlement! Wow bro! I wish u well”. 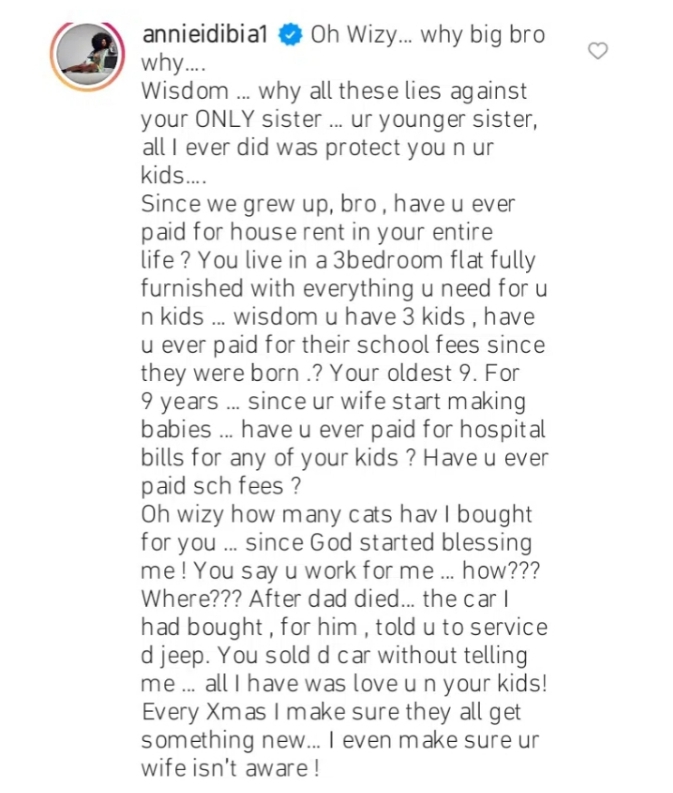 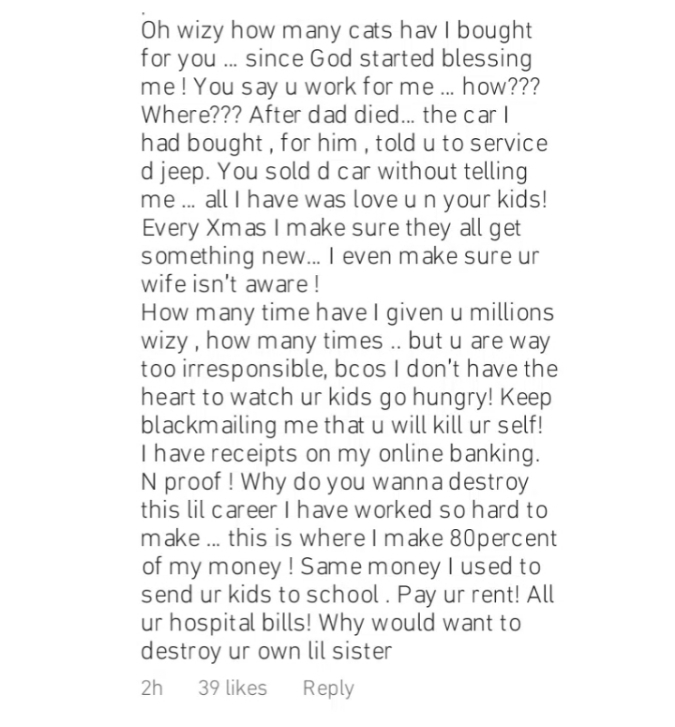 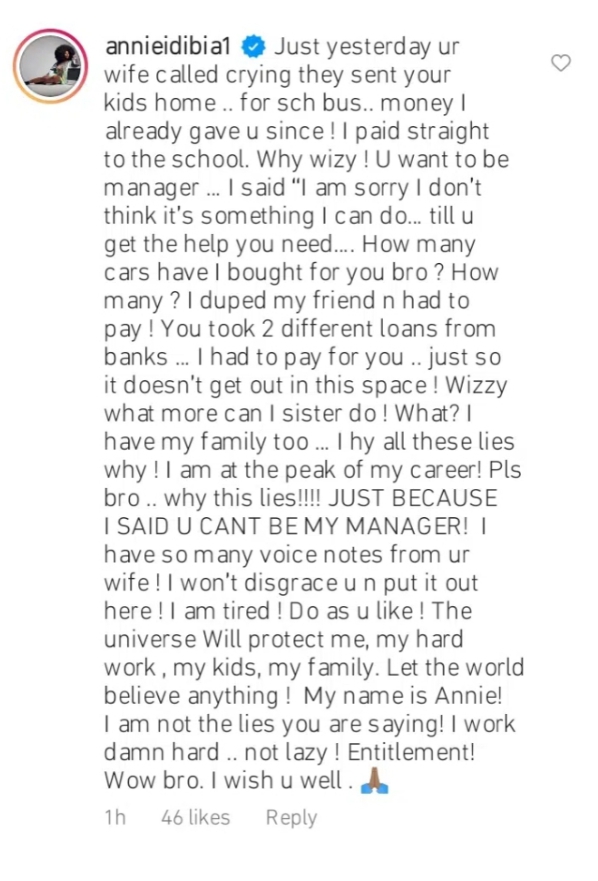