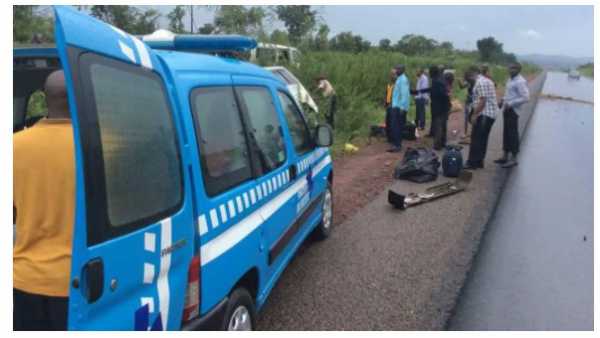 Four persons yesterday died while 13 others sustained injuries in a car crash on the Lagos-Ibadan Expressway.

The accident involved a Toyota Hiace in Fidiwo area of Ogunmakin on the highway when the bus suffered a tyre burst, summersaulted and went up in flames.

It was gathered that the four occupants that died were burnt beyond recognition.

The spokesman of the Federal Road Safety Corps (FRSC), Ogun command, Mrs Florence Okpe, confirmed the accident in a statement made available to newsmen, stating that accident occurred around 2pm and involved 18 passengers.

She said the crash involved a Toyota Previa marked LRG165AA which claimed six persons, while one female passenger sustained injury among the eight persons onboard.

She quoted the sector commander, Ahmed Umar, to have commiserated with the families of the victims and advised motorists to drive cautiously, always checking their tyres and avoiding speed violation.