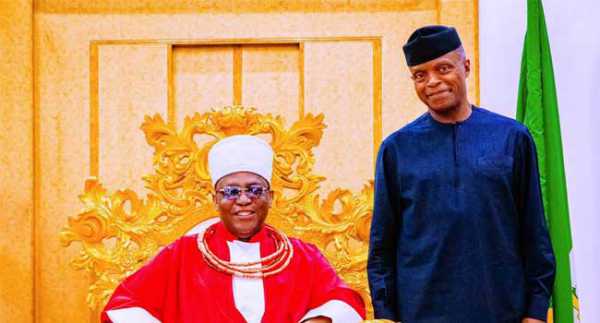 Vice President Yemi Osinbajo on Thursday visited the Oba of Benin, Omo N’Oba Uku Akpolokpolo, Ewuare II where he reiterated his desire to serve the country.

Osinbajo visited the revered monarch as he continues consultations ahead of the 2023 presidential race.

The former lecturer, who said he has been exposed to various areas of governance for years, noted that he is experienced to lead Nigeria.

While he told the Oba he is in the state for political reasons, Osinbajo said he deemed it appropriate to make the Palace his first stop.

The visit to the palace, the Vice President, explained is to inform the Oba of his intention to run for president in the coming election. He also said he is in the state to consult with members of the All Progressives Congress (APC).

Oba Ewuare, therefore, appealed to politicians not to continue in that trend.