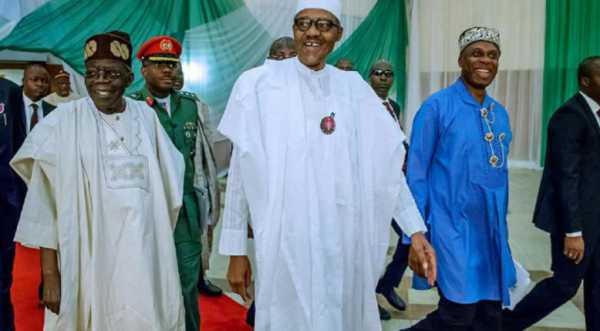 Abdulmumin Jibrin, the Director-General of the Bola Tinubu Campaign Organization, has responded to the Minister of Transportation, Chibuike Amaechi, running around the Port Harcourt Stadium in Rivers State before declaring his intention to run for the president in 2023 on Saturday.

According to Jibrin, although many people believe Amaechi was mocking APC leaders Abdullahi Adamu, Muhammadu Buhari, and Bola Tinubu, the Minister was merely “trying to save time.”

Recall that Amaechi revealed his ambition to run for President in 2023 in Port Harcourt on Saturday. The Minister traveled to his native state of Rivers, where he made the pronouncement at the Port-Harcourt stadium during an APC-organized Thanksgiving service. His declaration came after several pressure groups and organizations had allegedly called on him to join the Presidential race.

Prior to his declaration, the Minister ran around the stadium, in what is believed to be a show of physical fitness.

And Jibrin, in a tweet on Sunday, told those who feel Amaechi was making a mockery of Tinubu, Buhari, and Adamu, who because of age and frailty of health cannot stand such exercise, that the minister was only trying to save time.

Most Nigerians are vehemently kicking against Tinubu’s presidency, majorly because of his health issues.

Recall that the current President has also made the UK his second home due to his frail health.

“It’s unfair to Minister Amaechi for some people to think that by running round the stadium, he was trying to mock the age of incumbent President Buhari, brand new APC Chairman, Abdullahi Adamu and incoming president, Alhaji Bola Ahmed Tinubu. I believe he was only trying to save time,” Jibrin wrote on Twitter.

By this particular tweet, however, many social media users feel that Jibrin has indirectly mocked his principal, Tinubu, President Buhari and his party’s national chairman, Adamu.