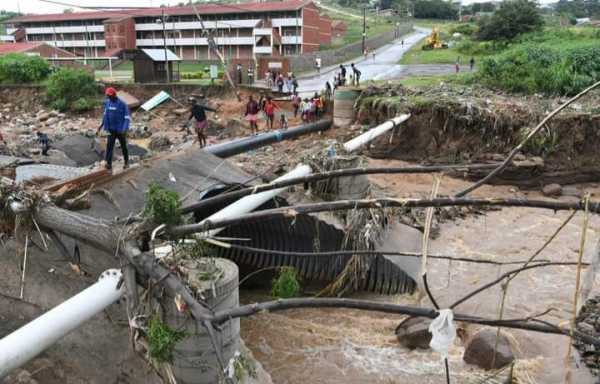 President Muhammadu Buhari has commiserated with South Africa over the flood disaster in KwaZulu-Natal province.

Rainfall, which began on Monday, resulted in flooding across communities in Kwazulu-Natal province of South Africa.

As of Wednesday, Sipho Hlomuka, cooperative governance and traditional affairs minister, was quoted as saying the death toll arising from the flood had risen to 259.

The KwaZulu-Natal provincial government had also described the flood as “one of the worst weather storms” in the history of the country.

As of Friday, the death toll was said to have increased to over 340.

According to a statement on Friday by Garba Shehu, presidential spokesman, while reacting to news of the disaster, the president said he was “saddened and unspeakably devastated”.

“I’m greatly shocked by this large-scale natural disaster which has caused widespread sufferings and fatalities in our sister country,” Buhari said.

“The disruption of water and electricity supply, as well as the destruction of homes, makes this natural disaster one of the worst in our recent memory.”

While extending his sympathy to the government and people of South Africa, Buhari called on other African leaders “to work together towards developing common and effective strategies for improving our emergency management response systems that will help us significantly reduce the human and economic impacts of natural disasters and impending climate change”.