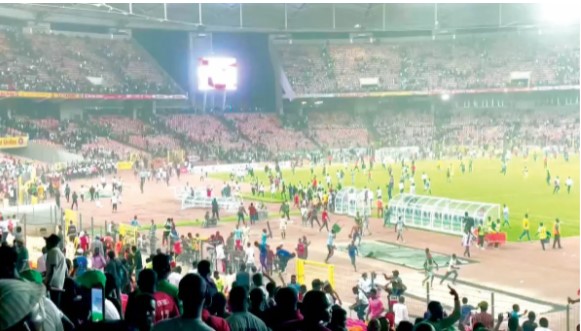 World soccer ruling body, FIFA, has imposed a 150,000 Swiss Franc fine on Nigeria following the unruly behaviour of fans at the end of the second leg Qatar 2022 World Cup play-off between the Super Eagles and Black Stars of Ghana at the Moshood Abiola Stadium, Abuja, on March 29.

There was a reported breakdown of law and order after the encounter as the Black Stars edged Nigeria out of the Qatar 2022 race on the away goals rule.

The match ended 1-1 but the two had earlier played out a barren draw in the first leg in Ghana.

Video clips from the stadium showed that furious fans invaded the field and damaged facilities after the match.

FIFA’s Disciplinary Committee said there was a lack of order and security at the match venue.

The disciplinary overview document stated that there was a “failure to implement existing safety rules and failure to ensure that law and order are maintained in the stadium, invasion of the field of play and throwing of objects.”

Apart from the 150,000 CHF fine, Nigeria will also play its next home match without fans.

Many other countries were also sanctioned for various infractions during the World Cup qualifiers.

According to the document, the decisions were based on the specific circumstances of each case, adding that some of the decisions may be subject to appeal.

The Nigeria Football Federation is yet to react to the sactions.