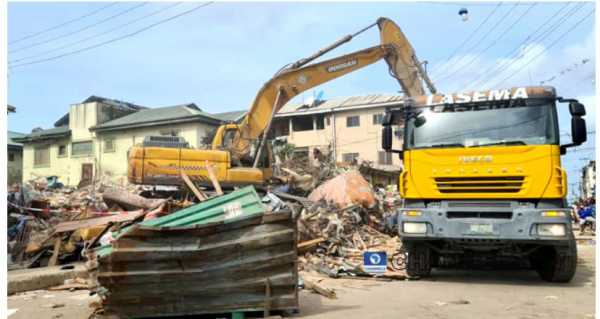 No fewer than eight persons have been confirmed dead after a three-storey building collapsed in the Ebutte Meta area of Lagos State.

The affected building, located at No. 38 Ibadan Street along Herbert Macaulay Way, went down on Sunday night.

A mother and her child were among those recovered dead from the rubble, the National Emergency Management Agency (NEMA) said on Monday.

NEMA’s Zonal Coordinator in the South West, Ibrahim Farinloye, who confirmed this revealed that 23 people have been rescued so far.

The latest incident is the second building collapse to be recorded in the Yaba-Ebutte Meta axis of the state in almost three months.

Another three-storey building collapsed in the Onike area of Yaba on February 13, resulting in several casualties after the developer of the project reportedly returned to the site despite a stop-work order on the structure.

While recounting Sunday’s tragedy, sources said dozens were trapped in the rubble after the building went down at about 10:56pm.

Farinloye, on his part, said 23 people comprising seven children and 16 adults trapped in the rubble have been brought out alive.

Nine of those rescued, he stated, have been treated and discharged, adding that the Nigeria Red Cross was making provision for psycho-social and trauma counselling for them.

Apart from the mother and child earlier recovered dead, the NEMA official confirmed the death of six other victims, including an elderly man who had a hearing impairment and a young man simply identified as Tahin.

He revealed that another three-storey building located on 100 Lagos Street – about 200 metres away from the structure that collapsed on Sunday has shown signs of distress.

Farinloye stated that the building had since been marked as distressed, but its occupants have remained defiant.

He, however, said the building has been re-sealed and its occupants evacuated by officials of the state’s buildings control agency – LABSCA.