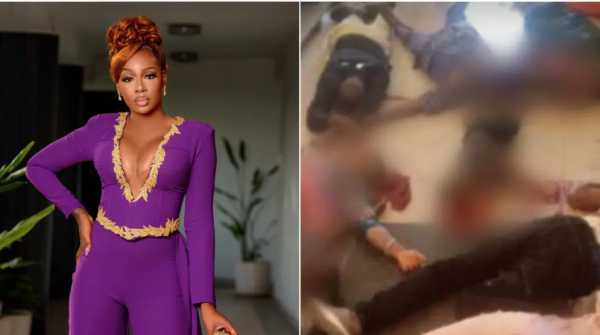 Former Big Brother Naija ‘LockDown’ Housemate, Tolani Baj got more than she bargained for after sharing what many perceived to be an insensitive post on Twitter.

Since the news of the gruesome killing of some Catholic members broke online, Nigerians have been thrown into a state of mourning as netizens and celebrities took to their social media pages to mourn the victims.

However, Tolani Baj ignored the tragic incident and took to her Twitter page to announce the release of her new vlog.

She tweeted: “A new vlog is dropping shortly”

The tweet didn’t sit well with many Nigerians as they dragged her for snubbing the killing at Ondo state and not condemning the attack.

@30bgfidi wrote: “@tolanibaj Ogun kill you and your vlog”

@nosafk wrote: “@tolanibaj This is not the right time though. The nation is at grieve with what happened in Ondo state. You could have at least accord some respect to the victims”

@fineboytunde_ wrote: “@tolanibaj It’s not your fault , BBN gave you relevance, smh. If not what’s a dullard like you doing with a verification badge”

@Anna_J_Udoh wrote: “@tolanibaj With everything going on now, you’re talking about vlog? All these yeyebrities sef. Smh”

@TomzyDaniel wrote: “@tolanibaj This one never hear news? maybe when they kill everyone finish your new vlog will be for our ghost”

@rutie_xx wrote: “@tolanibaj Tolani It’s like you enjoy being insulted”