Femi Adesina, the presidential spokesperson, refuted claims that President Muhammadu Buhari asked members of the Progressive Governors’ Forum to choose a consensus presidential candidate for the ruling All Progressives Congress.

According to him, the President only met with the governors to give them his “expectation” for the party’s upcoming presidential primary, contrary to reports.

In a piece titled “Visit to Spain: Let’s Buga for Mr President,” Adesina, who is the Special Adviser to the President on Media and Publicity, stated these points.

The presidential spokesperson clarified what happened during the meeting, saying Buhari never brought up issues like zoning, consensus, or imposition of candidates during his conversation with the governors.

According to him, President Buhari told them of what he would like to see at the APC presidential primary to elect a presidential candidate early next week.

He said, “No word about zoning, consensus, or imposition of candidate. He just charged them to let their plans converge, so that the party would put its best foot forward. Shortly after the meeting, we headed for the airport.

“A short time into the about five hours flight, I went on social media, to see that all hell had broken loose. Trust some Nigerians. When there’s no controversy, they simply create one. They will die of boredom if they don’t have something to wail or ululate about.

“What were they bellyaching on? Oh, he used the words ‘my successor,’ instead of ‘APC candidate.’ That means he wants to rig the election. Otiose.

“Oh, he talked about Governors who performed well being given opportunity to get a second term, for continuity. That means he wants to impose someone from within the government to succeed him. Consensus is what he wants. Puerile.

“Is consensus not one of the acceptable ways of choosing candidates, according to the Electoral Act? So the party can jolly well decide on the method it wants.

“Oh, he didn’t talk about zoning. APC wants to give its ticket to the North. Really? Did you see anything like that in the speech?

“I tell you. When some Nigerians don’t see what they expect in a speech or statement, they simply conjure and create their own. And the wailing starts.” 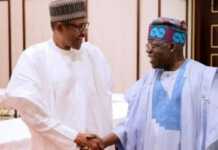 I Told Buhari I’m Running Nowhere, I Want To Occupy The Villa – Tinubu Says As He Visits Oba Of Benin