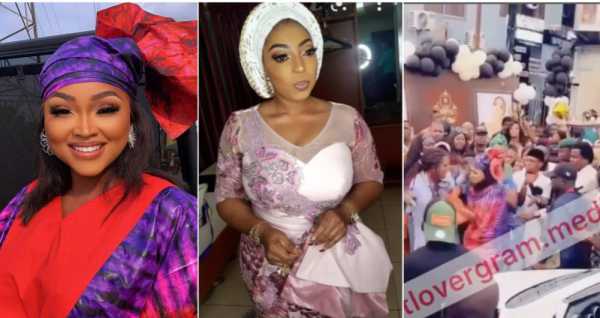 Mercy Aigbe, Iyabo Ojo, Lara Olukotun and many others were having fun at an event when the celebrities got into a heated argument which later degenerated into a fight.

The incident reportedly happened on Sunday, June 12, 2022, at the Lekki area of Lagos.

In the video sighted online, Iyabo Ojo who was seen siping a drink from her cup seemed surprised at Lara’s action but couldn’t do anything to help the situation.

Another video also showed the moment some people were seen attempting to separate Mercy Aigbe and Lara Olukotun as they engage in a physical fight.

Meanwhile, the cause of the public brawl is unknown but there are speculations that it may be related to Mercy Aigbe’s new marriage to movie producer Kazim Adeoti.

jollofbraiding wrote: “It has not even reach 5month now,mercy has been receiving karma ,mercy will not know peace as she doesn’t allow the first wife to have peace,peace will always be far from her.”

simplybewaji wrote: “One thing about Iyabo Ojo is that she runs away from fight”

_oluwaneakie wrote: “This larrit nah vawulence pikin she go b she get starting hope say she get finishing sha”

adaugosolange wrote: “Mercy in the trenches mud You nova start to fight”