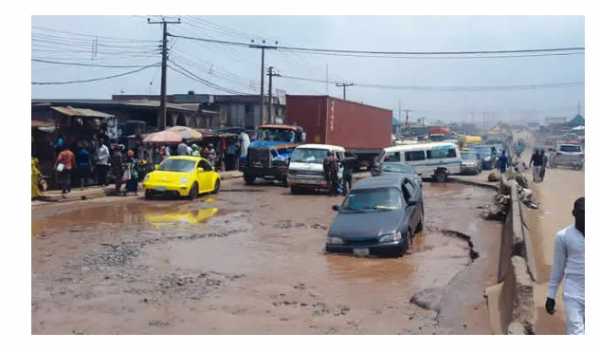 The Ogun State governor, Dapo Abiodun, says his administration has agreed to be part of the funding for the reconstruction of the deplorable Lagos -Ota-Abeokuta expressway.

To this end, Abiodun said the administration has got the approval for a template that will allow the state government to partly fund the reconstruction.

Our correspondent reports that the highway has been problematic having turned into death trap due to its deplorable condition.

Speaking at Ota, during the 70th birthday ceremony of the Chairman of the Ogun State House of Assembly Service Commission, Olayiwola Taiwo, held in Ota, Abiodun noted that his administration agreed to be part of the funding for the reconstruction of the road after it realised that there was a shortfall in the 2022 budget.

The governor stated further that his administration was working round the clock towards ensuring the timely intervention and completion of the important road.

“It is most unfortunate that the road has been under contract before this administration, otherwise, we would have reconstructed the road as soon as we assumed office. But, because the road had been awarded to Julius Berger, we had to find ways and means to work with the Federal Government. We are working very hard and very soon, you will see that that road will be reconstructed speedily.”

“We have finally got the approval for the template that will allow us as government to put some money into that construction as we have agreed to be part of the funding for the construction. We realized that there is a shortfall in the money that the government has approved in the 2022 budget.

“Our administration has, however, agreed to provide for that shortfall to allow for the full completion of the road from Ota to Abeokuta,” he said.

Abiodun who further said that the reconstruction of the Sango-Idiroko road would soon start under the tax credit scheme of Mike Adenuga, added that his administration would continue to give the Ado-Odo/Ota Local Government all the attention that it deserves.

While noting that his administration would soon begin the construction of affordable houses in the local government, the governor said that ,”I know we’ve had challenges in Ota because of the value and availability of land, it is very difficult to find where you will build such affordable housing units because of the commercial nature of Ota”.