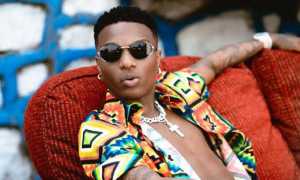 Fans of Nigerian Grammy-award-winning singer, Ayo Balogun fondly known as Wizkid, have sent their congratulatory messages to the superstar singer as he clocks 32.

The singer is currently trending at the number one spot on the Nigerian Twitter space with over 90,000 tweets based on his birthday. Also known, as Big Wiz, the singer’s fans while sharing several pictures and videos of Wizkid created the hashtag #WizAt32 to celebrate his birthday.

Sharing a video of Wizkid doing a freestyle, the Twitter user, @timiPR wrote, “I was in 100L in school when this video dropped and I could remember disturbing my roommates with it… I even had to master it word for word. Big Wiz’s growth is amazing, this kinda p ain’t regular at all.”

Born Ayodeji Ibrahim Balogun, he began recording music at the age of 11 and released a collaborative album with the Glorious Five (5), a group he and a couple of his church friends formed.

In 2009, Wizkid signed a record deal with Banky W’s Empire Mates Entertainment (E.M.E). He later rose to the limelight after releasing “Holla at Your Boy”, the lead single from his debut studio album, Superstar (2011), which also spawned the singles “Tease Me/Bad Guys” and “Don’t Dull”. In September 2014, he released the self-titled second studio album, Ayo. The album was supported by six singles, including the song “Jaiye Jaiye”.

Wizkid left E.M.E after his contract expired. In 2016, Wizkid achieved international recognition following his collaboration with Drake on the hit single “One Dance”, which reached number-one on the US Billboard Hot 100 and topped the charts in 14 additional countries. The song broke multiple records, making Wizkid the first afrobeats artiste to appear in the Guinness World Records.

In March 2017, he signed a multi-album deal with RCA Records; and released his third studio album Sounds from the Other Side, later that year. The album was supported by five singles, including “Come Closer” featuring Drake.

In 2018, he was featured on the song “Checklist” by Normani and Calvin Harris, which reached number one on the Billboard World Digital Song Sales chart.

The following year, he was featured on Beyoncé’s project The Lion King: The Gift on the single “Brown Skin Girl”, which also reached number-one on the World Digital Song Sales chart, and won him a Grammy Award for Best Music Video.

In October 2020, he released his fourth album, Made in Lagos, which received commercial success and acclaim reaching number one on the Billboard World Album Chart.

By February 2021, Wizkid was the most-streamed Nigerian artist of all time on Spotify, with over 3.4 billion streams across all credits