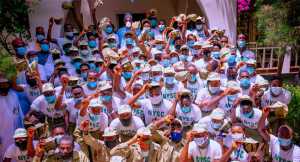 The director-general of the National Youth Service Corps (NYSC) has been sued before a Federal High Court in Abuja, over the continued existence of the scheme.

In the suit, the plaintiff, Okomayin Ude, prayed the court for an order, that the continued sustenance of National Youth Service Corps Act, 1993 and the mandatory posting of Nigerian youths to states prone to insurgency and ravaged by banditry, is a breach of the right of the youths to security of life and dignity as guaranteed by Sections 33 and 34 of the 1999 as amended.

He also prayed for an order of injunction restraining President Buhari from assenting to the National Youth Service Corps Trust Fund Act, Bill, 2022 as proposed by the National Assembly.

Within the affidavit in support of the originating summons, deposed to, by the plaintiff, Ude said he knows that the taxes paid by Nigerians form part of the revenue that the government of Nigeria is using to run and fund the NYSC, therefore the way and manner in which the government utilizes the revenue affects him personally.

According to him, the proposed National Youth Service Trust Fund Bill if assented to by the president, will impose additional taxes as proposed by the bill on him and other tax paying Nigerians.

He also asserted that “assenting to the Bill for the creation of National Youth Service Corps Trust Fund and spending more or additional public funds on the scheme will not only be additional burden on Nigerian tax payers of which he is, but a waste of public fund on a scheme that has lost meaning and relevance.

“That the National Youth Service Corps Scheme contemplates that every Nigerian Youth that the scheme applies to shall be able to be posted to anywhere in Nigeria and in service of the Federation.”

No date has been fixed for the hearing of the case.