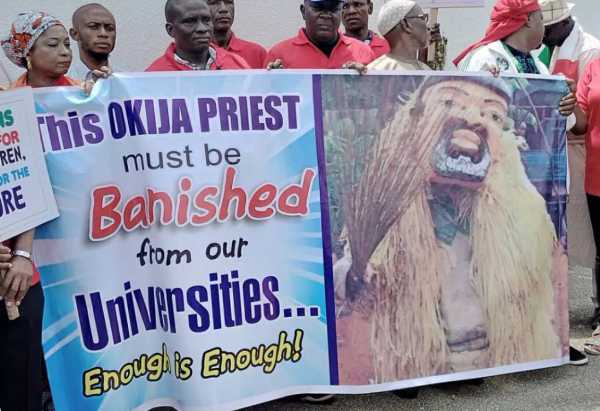 The Minister of Labour and Employment, Chris Ngige, on Wednesday, was mocked during the protest organised by the Nigeria Labour Congress (NLC) in solidarity with the Academic Staff Union of Universities (ASUU).

Some protesters in the Federal Capital Territory were seen carrying a banner to mock the former Governor of Anambra State.

Members of ASUU have been at loggerheads with Ngige over the unprogressive negotiation between the union and the federal government.

Ngige last week had also condemned the move by the NLC to embark on strike in solidarity with ASUU.

The minister noted that he does not expect Labour which is on the negotiation committee to protest.

An official of ASUU who spoke with Punch said they are mocking Ngige because of his inability to resolve the issues between the federal government and ASUU.

The official also condemned him for his statement last Wednesday concerning the ongoing protest.

The picture of the minister was made like an ‘okija priest’.

He said, “We’re mocking Dr Chris Ngige with this banner because he was against the protest despite not being able to convince the Federal Government for over five months to resolve the issues with ASUU, and also for speaking against the protest last week.”