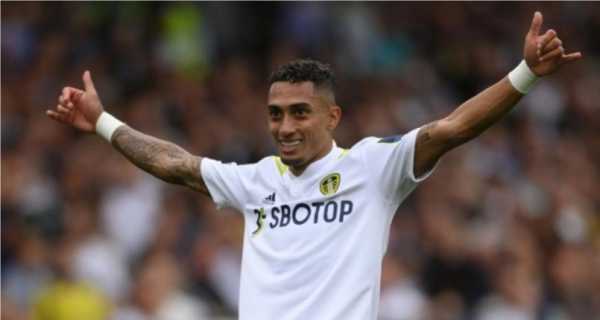 Brazil winger Raphinha, who played a pivotal role in Leeds United retaining their place in the Premier League last season, is poised to sign for Barcelona after the clubs agreed to the deal in principle on Wednesday.

The 25-year-old will cost the Catalans a reported 55 million euros ($55.3million) — with a potential 15 million euros in add-ons — and sign a five-year contract.

“Barcelona and Leeds United Football Club have reached an agreement in principle for the transfer of Raphael Dias Belloli, Raphinha, pending the player passing his medical,” read a statement on the Barcelona website.

Barcelona said they were buying: “a winger who is excellent in one on one, taking on defenders being a key part of his game.”

Raphinha spent two seasons at Elland Road, scoring 17 goals and providing 12 assists after they signed him from Ligue 1 outfit Rennes for £17 million – the French side are due a cut of the transfer fee.

Raphinha — who had two years remaining of his contract — became a fans’ favourite and earned himself a permanent place in their hearts when he scored a penalty in the 2-1 win over Brentford in their final match of last season to ensure they stayed up in the English top-flight.

Leeds manager Jesse Marsch — who replaced the sacked Marcelo Bielsa at the end of February — paid tribute to Raphinha admiring the dedication he showed in the battle to keep them up.

“I’ll say this about Raphinha,” said Marsch on Sky Sports from the team’s base on their pre-season tour of Australia.

“If you think about a young man who was pretty much guaranteed to go on a reduced transfer fee (reported to be £25 million), 100 per cent to Barcelona if we were relegated.

“Then you watch the performances and the commitment he had to make sure the club was going to stay up, I think it would be difficult for any 25-year-old to perform with that pressure the way that he did.

“We are so thankful.”

Barcelona have been able to spend after easing their massive financial problems by selling 10% of their TV rights at the end of June to American company Sixth Street for 25 years at a cost of around 207.5 million euros.

Raphinha is the second big name to leave Leeds in the close season with England midfielder Kalvin Phillips departing for champions Manchester City for a fee of £45 million.

Leeds, though, have not been quiet themselves in the transfer market buying six players as they bid to avoid a repeat of last season’s nerve-wracking experience.

Among them is Colombian winger Luis Sinisterra, who they signed for a reported £21.4 million last week from Dutch side Feyenoord as Raphinha’s departure became inevitable.