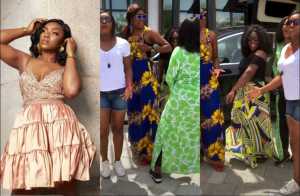 Chioma Akpotha, an actress in Nollywood, is thinking back on a special day she shared with Omoni Oboli, Ufuoma McDermott, and Uche Jombo.

Chioma reflected on their special relationship while sharing a flashback video of them enjoying fun in Dubai.

She described their experience in detail, saying that she still vividly recalls the day. Chioma continued by saying she was eager to relive similar experiences with them.

Chioma wrote: “I remember this day/video like it was yesterday! Goodness! We had maximum fun!.

From @ufuomamcdermott who started off like she was choir conductor to @uchejombo who jumped in like she was going to scatter everywhere with her dance moves and to someone (pls dont tag her) who kept twisting her waist just to prove to us that she has bombom o!.

DUBAI was Funnnn and I cannot wait to do it again in a few weeks, not just with my girls but with 12 lucky ones that will be picked at a live Instagram show on the 16th of August!…..”.