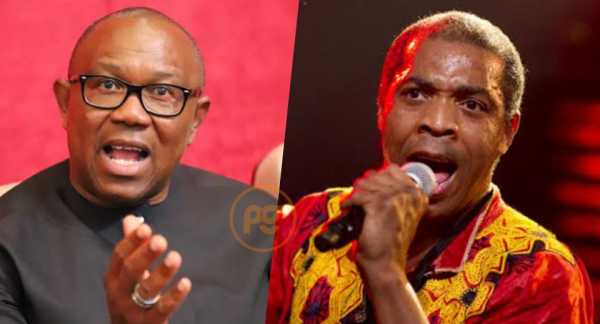 Zombie was the title of a studio album released in 1976 by his late father, Fela Anikulapo Kuti, when he derided Nigerian soldiers as a bunch of robotic and senseless individuals. The song, which went on to be one of Fela’s greatest hits, followed a raid on his residence in Lagos at the time.

“You know what obedience means? Stand up, sit down, sit there — zombie,” Mr Kuti said during a performance at the Shrine Thursday night in Lagos, wondering why Mr Obi’s popularity has grown rapidly in recent months.

“How can you be Obidient in this chaos? I am not Obidient. Tell me, at 60, why am I Obidient? You said I should be Obidient, sit down, be peaceful,” he said. “Are you all okay in this country?”

Mr Obi’s candidature has garnered grassroots support from young Nigerians who see him as a better alternative to other candidates in the 2023 contest.

His campaign runs on the energy of young Nigerians who describe themselves as “Obidient” followers on social media.

Mr Kuti has not expressed support for any presidential candidate this cycle.