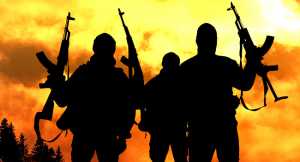 Four persons, including a traditional head in Ikare Akoko, High Chief Mukaila Bello have been abducted by gunmen on Thursday evening while traveling from Akure, the state capital, to Ikare-Akoko.

The incident was said to have happened at Ago Yeye axis, along the Owo/Ikare Road.

The driver of the car conveying them was said to have been hit on the head by a bullet from the attackers and he is now receiving treatment at an undisclosed hospital in Owo.

She disclosed that the vehicle, a Toyota Corolla car with registration number KAK 818 AE has been recovered while the driver is receiving treatment at a nearby hospital.

Odunlami added that a team of policemen has been dispatched to the area and have been combing the nearby bush in order to apprehend the kidnappers and rescue the victims.