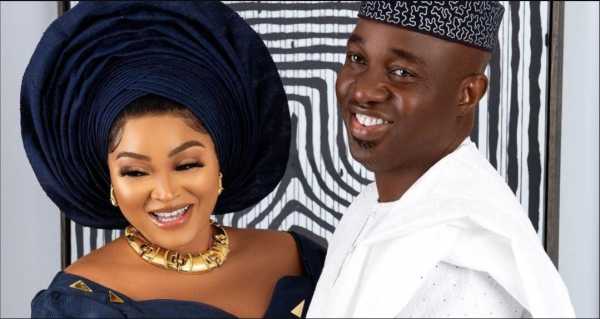 Nollywood actress Mercy Aigbe Adeoti appears to have been questioned by her husband about her dress for the iconic musician Kwam1’s 50th anniversary on stage.

Following his endorsement of the event a few days prior, Kazim Adeoti attended the star-studded event in style with his actress wife.

The Fuji singer shut down Lagos as he performed to mark his 50th birthday. Many celebrities attended the event, which was held at the elegant Oriental Hotel.

Lagos billionaires and monarchs, as well as Yoruba Nollywood stars, were there.

In an online video, Kazim Adeoti could be seen admiring his wife’s fully exposed cleavages.

The marketer who thinks women are more attractive when they are covered appears to be gazing his wife.

Mercy Aigbe appeared timid and uneasy as her husband continued to fixate on her breasts.