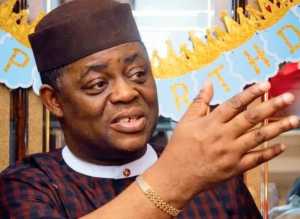 Fani-Kayode, a former Aviation Minister, has given his opinion concerning the ongoing crisis rocking the Peoples Democratic Party (PDP).

He also urged them to investigate the National chairman, Iyorchia Ayu over the 1billion naira he allegedly stole rather than complain about the constituents of the APC’s presidential campaign council.

He wrote: “Instead of these Atikulators to put their house in order, beg Nyesom Wike & find out what their Nat. Chairman did with the 1 billion he stole they are complaining about the compostion of our PCC. Face your problems & leave us alone. We will meet you in the field & flog you well!”